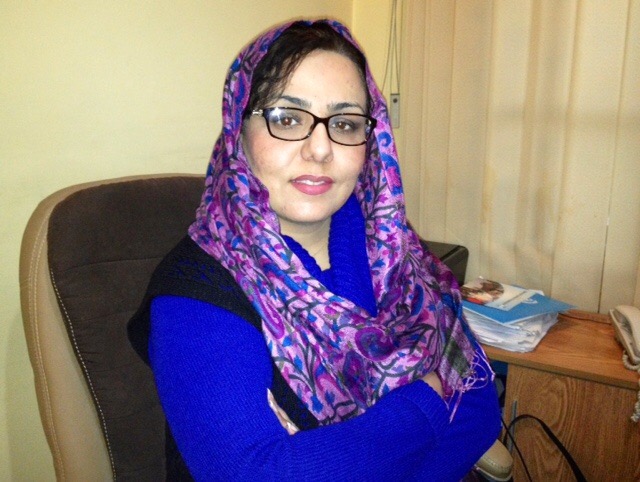 On April 14, the United States, in agreement with the Afghani government, bombed Afghanistan’s Nangarhar province using the so-called “Mother of All Bombs” (MOAB), the largest non-nuclear device ever deployed. The 11 tons of TNT was targeting ISIS fighters who have taken over the area’s caves. Extremist ideologies have been on the rise for decades, but does dropping a bomb solve the problem?

We interviewed Mary Akrami, an award winning women’s rights defender and director of the Afghan Women Skills Development Center about this issue. She should know. Threats from extremists have forced her to consider changing the locations of the shelters she heads to protect the lives of shelter residents.

Akrami talked with Ms. about violence in her homeland, discrimination against women and the lives she has saved through her work.

The U.S. dropping a bomb in Afghanistan made major news. What did you think of the move?

It was horrible and we were really shocked, but for the past year, people in that area have been suffering and conditions are very bad especially for women. The government lost control of the area, and lost many soldiers. ISIS took control and spread fear, killing people, looting houses and kidnapping women. Those people lived under such terrible circumstances. Many of them didn’t care about the side effect of this bomb; they were happy to get rid of ISIS. A lot of people on social media opposed us for criticizing the bombing.

All the Afghanis are so tired of this war; enough is enough for this country. We had Taliban, and then ISIS came and no one talks about how they suddenly came or how they became so powerful.

It was said that only tunnels used by ISIS were targeted and that there were no civilian casualties, but no one has an accurate report because they haven’t allowed media around, and in Afghanistan most media is not independent.

Can you describe in general what violence and extremism look like in your country and how they are affecting Afghanistan?

Unfortunately extremism is on the rise, especially in regions that are not under government control. There is the violence of armed extremist groups like ISIS and then there’s domestic violence. From my observation, domestic violence has increased and could be affected by the actions of militants. People are becoming more violent and cutting off women’s ears and noses, and sometimes even killing them. Poor women are always victims, especially in areas where women do not have access to aid, and they don’t have power to stand up to such men. Women who are able to escape such violence want to find their own way and want to stand on their own feet.

The economic situation is also not helping. When a man is jobless, he gets easily influenced by violence and goes home to practice it on women and children.

What do you think the solution is to combat all this extremism and violence?

We see some progress in big cities where there’s more education for girls, and more women are working, but we need peace. If there is security, then definitely we will find the way for advocacy and how to educate people and change their behavior. You can only provide education when there’s security, when their minds are not under the pressure of witnessing killing and fighting.

How could women be a crucial part of peace negotiations? 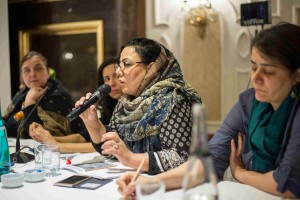 I always say women could play their role at different levels. At the community level, when there are some conflicts or violations inside the home, a man cannot interfere. However women, even if they are neighbors and not family, are able to resolve issues.

Women must be part of peace negotiations and processes in Afghanistan. But they are not treated the way the men are. It is difficult for a woman even though we are always at the frontlines and we make our voices heard. It is still a big challenge for women for lack of safety and security.

As one of the women who pushed for the Law of Elimination of Violence Against Women (EVAW law) until it was passed in 2009, how has it been implemented? Does it face any threats?

The law is used on a daily basis for most cases especially in big cities and for safe houses, but it is under threat. Women’s issues are political issues. The parliament said that they do not approve of it, and keep trying to amend it and take out articles empowering women. They are fundamentalists and do not accept women’s rights. Sometimes when international organizations are involved, the government attempts to show that they support the women of Afghanistan by supporting this law. Every day the law helps women to get legal aid when there is violence against them, or to get a divorce. We are trying to keep the advocacy strong but it is difficult as we are challenging the government.

Can you give me an example of a case which made good use of this law?

The case of Lal Bibi. In 2012, 18 year-old Bibi was abducted by a group of policemen who beat and raped her for five days. We succeeded to put those powerful men in jail for 20 years. This was also the first court in Afghanistan to be open to the media.

In 2007 you won the International Women of Courage Award and you were named in the BBC 100 Women 2016 list as one of the year’s most inspirational and influential women. What is your biggest achievement?

How I had the courage to open the first shelter for women at risk in such a country. I did not want to die before I did something good.

Can you give us details about the safe houses, and the conditions of women they receive?

The houses are for women who have suffered domestic violence, and who run away from their families. Some have babies, some have had their noses or ears cut off.

Since I opened my shelter in 2002 in Kabul, more safe houses have been opening. We now have more than 27 safe houses around the country which are supporting women. We have a 24 hour service because women usually run away at night.

In 2007, we trained police on how to deal with such cases, and treat the women nicely and refer them to a safe house.

We have different facilities and activities inside the safe house. We have literacy and computer classes for those who didn’t go to school. There is psychological counseling, and basic skills training. We have kindergarten for the women’s children. In 2013, we started a catering service, a small kitchen inside the safe house which we found was the best way for the women to earn money.

What other work are you proud of?

I was involved in advocating for and getting a special court set up because of the EVAW law. We also had a special attorneys’ office for the elimination of violence against women established.

The behavior when a woman is raped has somewhat changed. Normally when a family knew that a daughter was raped they killed her or the rapist, but some have come to realize they have other methods to solve the issue and can jail the rapist.

In 2003, we were the first organization that began to educate people about women’s rights and about peace.

The safe house has also helped Pakistani women who didn’t know they were in Afghanistan for years. They were locked up and in a very bad situation and then one of them ran away and involved us. We got the man responsible arrested and jailed, and we had the privilege to provide the women with legal support, shelter and related services and then sent them home after five months. It was the first time in Afghan history that the perpetrators were sent to prison, which was due to the implementation of the anti-trafficking law.

We also aid women in successfully having national ID cards, and thus getting to attend school or open up bank accounts. Most women in Afghanistan do not have an ID, because men do not want one for their wives and daughters.

More than 4700 cases during the last 13 years have come under our care, usually dangerous ones. During one case, extremist men tried to stop our car from getting to the court. I changed my house to different areas three times in a year as my life and my family’s life was in danger.

Can you tell us about the work you do on the economic empowerment of women?

We help women find jobs, and most recently we opened up Boost Restaurant.

About seven months ago, we established the first restaurant fully run by the women who have been taken in by safe houses because of domestic violence. When I see these women enjoying their time I feel proud. I was joking with one woman saying now you have a salary and you can get married, and she replied “why should I get married now that I have the right to count my money by myself?”

Upon being housed in one of the shelters, one woman told us she had never held a whole thousand rupees in her hand. Today she works at the restaurant and has earned 80 thousand. Now 22 women are working and have their own bank accounts.

Also the restaurant is an opportunity for families whose women never have the chance to go out for lunch or dinner. Most restaurants are run by men, and poor women must cover their faces, but now it’s fun. When men go to a restaurant run by women, this is a positive change.

The greatest achievement is seeing how happy the women are.