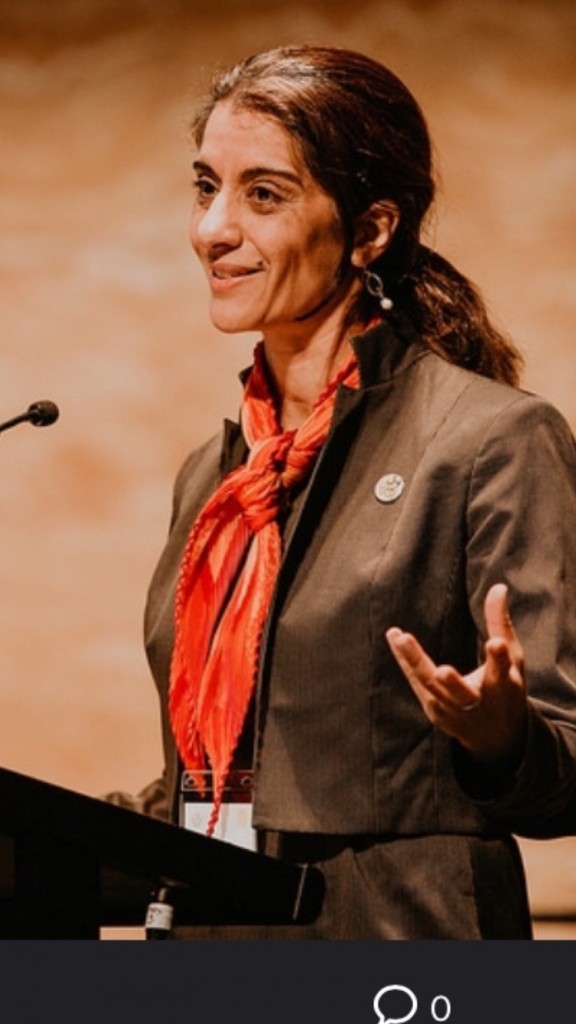 As the Founder and Executive Director of ICAN Sanam Naraghi Anderlini has over two decades of experience as a peace strategist working globally on conflicts, crises and violent extremism with a mix of civil society, governments and the UN. At ICAN she spearheads the Women’s Alliance for Security Leadership (WASL) comprising independent women-led organizations active in 40 countries globally, preventing violence and promoting peace, rights and pluralism.

In 2000, she was a civil society leader and drafter of UN Security Council Resolution 1325 on women, peace and security and in 2011 she was the first Senior Expert on Gender and Inclusion on the UN’s Mediation Standby Team, working on Somalia, Libya and Syria among other cases. Working with UNFPA in Nepal, she led the first assessment team into Maoist cantonments. Between 2008-2010, Ms. Anderlini was Lead Consultant for a 10-country UNDP global initiative on “Gender, Community Security and Social Cohesion” with a focus on men’s experiences in crisis settings.

Ms. Anderlini was among the first to analyze and document women’s experiences in formal peacemaking with Women at the Peacetable: Making a difference (UNIFEM 2000). Between 2002 and 2004 she led the Women Waging Peace Policy Commission with 12 in-depth country studies on women’s contributions. Other works include Women Building Peace: What they do, why it matters (Rienner, 2007) and SCR 1325 and Participation (MIT/ICAN 2010) reflecting on progress on the agenda in 6 country cases. In 2014 ICAN and UNWomen hosted the first Better Peace Forum to review women’s participation in ongoing peace processes. The symposium led to ICAN’s Better Peace Tool and Initiative (BPI) on the ‘how to’ of ensuring women’s effective inclusion and systematic gender mainstreaming.

Under her leadership ICAN has developed the multi-donor Innovative Peace Fund (IPF) to channel resources to local women-led organizations preventing violent extremism (PVE) and peace building. Between 2015-18 the IPF disbursed over $2,000,000 in 26 countries. She also established the Global Solutions Exchange (GSX) to enable systematic interactions between local CSOs, governments and international policy makers on security, economic and education issues as related to PVE.

Her current appointments include serving on the Steering Board of the UK’s National Action Plan on Women Peace and Security, the Commonwealth’s Panel of Experts on Countering Violent Extremism (CVE), UNDP’s Civil Society Advisory Council and as adjunct professor at Columbia University. She was the 2014 recipient of the UN Association Perdita Huston Award for human rights and the 2016 Greeley Peace Scholar at the University of Massachusetts. Her media appearances include the BBC World Service television and radio. Her editorials have appeared in The Guardian, Foreign Affairs, Open Democracy, Ms. Magazine and other publications.

In December 2019, Ms. Anderlini received the Member of the Most Excellent Order of the British Empire (MBE) award in recognition for her work and for services to international peacebuilding and women’s rights.

She speaks four languages and holds an MPhil in Social Anthropology from Cambridge University. Iranian by birth, Sanam is a UK citizen, and has twin daughters.

At The United Nations General Assembly

A video profile by Fuuse

At The Norad Conference

At the One Earth Future Forum

At the Nobel Peace Prize Forum

To Sustain Peace: Heed the Warnings & Prevent the Next War

By Sanam Naraghi-Anderlini
As the May 12 deadline looms for the US’s endorsement of the JCPOA, world leaders who claimed to support Mr.Guterres’ sustaining peace agenda, have a clear moral imperative: to stand by their words and sustain the peace for the millions of civilians in Iran and beyond who would pay the price if violence escalates.

Rise of Feminism & the Renewed Battle for Women’s Rights

“So 101 years on as March 8th 2018 dawns, how far have we come and how far do we still need to go?” Sanam Naraghi Anderlini writes about the battle for women’s rights

By Sanam Naraghi Anderlini
If past events are any predictor of the present, it would be erroneous to assume that they will result in either the status quo remaining or the hardline reasserting control.

Some 17 years after the UN resolution on women, peace and security, women make up just 5 percent of deployed blue helmets. It’s time to find the political will to upend the status quo.

Iran: The Change that Matters Is Happening Already

By Sanam Naraghi Anderlini and Sina Azodi
The change in the Iranian political sphere is prompted by the dynamic transformation of its social and cultural space since 1979. One of the best indicators of this transformation is the status of women, who have been key players all along.

By Sanam Naraghi-Anderlini
Sexual abuse by peacekeeping forces demands the international community’s attention. Sanam discusses how to end it once and for all.

By Eric Rosand and Sanam Naraghi Anderlini
Yet again the UN failed to reach out and listen to the solutions and recommendations that civil society had to offer.

The Bomb to End All Bombings – If Only

By Sanam Naraghi Anderlini
Does a 21,600 pound bomb solve the Daesh problem?

Back to Our Team