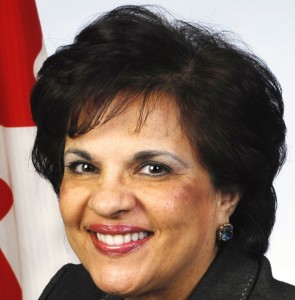 The Honorable Mobina Jaffer served as Canada’s Special Envoy for Peace in Sudan from 2002 to 2006. She is often invited to speak at international conferences on security issues and the United Nations Security Council Resolution 1325, which “urges all actors to increase the participation of women and incorporate gender perspectives in all United Nations peace and security efforts” and “calls on all parties to conflict to take special measures to protect women and girls from gender-based violence, particularly rape and other forms of sexual abuse, in situations of armed conflict.” As a grandmother, women’s rights and children’s rights are central to Honorable Jaffer’s advocacy.

An accomplished lawyer,  the Honorable Mobina Jaffer has practiced law at the firm Dohm, Jaffer and Jeraj since 1978. Appointed a Queen’s Counsel in 1998,  she was the first South Asian woman to practice law in Canada and she has a distinguished record of service to the legal profession. The Women’s Executive Network named the Honorable Mobina Jaffer among Canada’s Top 100 Most Powerful Women in 2003 and 2004. In 2003, she received an Honorary Doctorate from Open Learning University.

The Honorable Mobina Jaffer earned a Bachelor of Laws from London University in London, England in 1972. She has also completed the Executive Development program at Simon Fraser University in British Columbia. Born in Uganda, Honorable Jaffer speaks six languages and is married with two adult children and two grandchildren.