Just before heading home to Australia last August, Maj. Bettina Stelzer did her last round of village visits in the outskirts of Juba, South Sudan. A member of the United Nations peacekeeping mission, Stelzer was searching for an elderly woman with an eye infection she’d promised to help. Her rounds, which included stops in other nearby communities, gave Stelzer a chance to speak to local women about their daily struggles with health and poverty and all that comes from years of living with war.

U.N. peacekeepers like Stelzer (commonly known as Blue Helmets for that distinctive part of their uniform) serve in countries afflicted by civil war or natural disasters. Their ranks are made up of soldiers and police officers—but also medical personnel, experts on gender violence, civil-society advisers and first responders. To their detriment, Blue Helmets are overwhelmingly male.

“Women bring a different perspective to peacekeeping operations,” Stelzer told News Deeply. “[We] are able to access different areas of the communities and gather different information.” 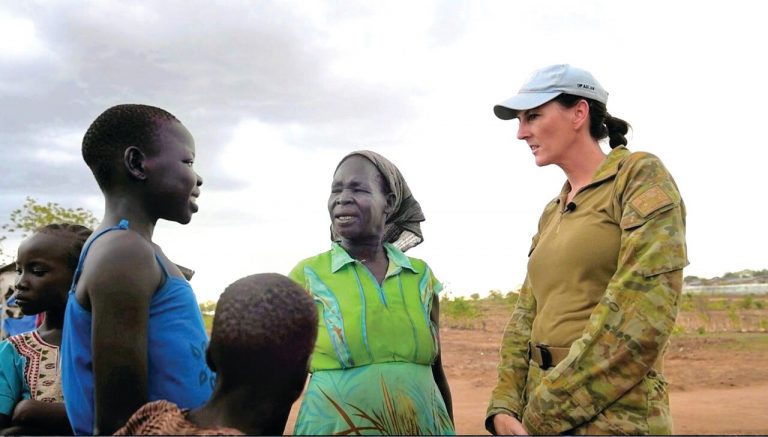 Maj. Bettina Stelzer meets with women and girls on her village rounds in South Sudan.

The U.N. seems to notice and value this difference. In May 2017, the organization awarded the Mongolian peacekeeping unit also serving in South Sudan with the prestigious U.N. Medal. In reflecting on the unit’s service, David Shearer, head of the U.N. Mission in South Sudan, paid special tribute to the 41 women in the Mongolian forces, calling women peacekeepers “critical because they…empower women in local communities [and] provide a greater sense of security for women.”

Neighboring Darfur has the first majority-female unit. Forty of the 77 Malawian police officers deployed there are women. Given that their mandate includes the protection of civilians, the women are well-placed to engage with local populations of women and children. Their presence contributes to better information gathering about local conditions and improved community relations, which in turn contributes to the seeding and sustaining of peace.

These examples are a sharp and refreshing contrast to the kinds of stories about Blue Helmets that have made headlines. In October, Amnesty International reported the story of a teenage girl who was walking home from a funeral in a rural town in the Central African Republic (CAR). Feeling unwell, she accepted a cup of tea at a U.N. checkpoint from some soldiers who’d been sent to uphold the peace and bring some sense of security to the people of that war-torn nation. The young woman woke up several hours later, nearly nude, heavily sedated and with traces of drugs in her bloodstream. Medical examinations later proved the soldiers had given her neither peace nor security. Instead, they had drugged, stripped and raped her.

There are other cases to consider. In 2013, the Associated Press broke the story of a child sex ring run by U.N. peacekeepers in Haiti. Some 134 peacekeepers were implicated; 114 of them were sent home, but neither they nor their commander served any prison time. Meanwhile, Haiti’s children live with the lasting effects of this abuse. One little boy reported being raped by more than 100 peacekeepers—on average four times a day over a three-year period.

“The inclusion of women in peacekeeping forces,” says Phumzile Mlambo-Ngcuka, undersecretary of the U.N. and executive director of U.N. Women, “is one important way of addressing issues of sexual violence and reducing its incidence.” Examining U.N. peacekeeping missions between 2009 and 2013, researchers Sabrina Karim and Kyle Beardsley found that “increasing the proportion of women from 0 percent to 5 percent in military components reduces the expected counts of allegations of sexual exploitation and abuse by more than half.”

But the experiences of Maj. Stelzer, the Mongolian officers and the Malawi police demonstrate that women’s contributions to peacekeeping aren’t limited to reducing egregious acts of sexual abuse (as important as that is). They can be models for women in the societies in which they serve. And they play a vital role in engaging the community.

As Mlambo-Ngcuka points out: “Why would we expect village women to trust strange men in military uniform in peace when so many have experienced the brutality of uniformed men with guns in conflict?”

This article was originally published on Ms. Magazine. To read the full article, please click here