In Iran today, over 20 people have been killed in the streets and two young men are dead from unknown causes after being detained in prison. An estimated 3,700 others have been arrested across the country, most of them under the age of 25. In Tehran the families of detainees are camping outside Evin prison awaiting news of their children. With such news in the headlines, it is hard not to be pessimistic about the protests that for a week rocked the country and riveted the world. But perspective matters.

As usual, media commentary veered between those who believed or wished that Iran was on the brink of a major change and those who put a damper on the enthusiasm by reflecting on the strength of the Iranian state and warning against the potential negative outcomes of any regime downfall. Now that the latter has won out, the assumption is that the status quo of an inflexible regime will remain.

But in Iran nothing is ever black and white, either/or. The society and its politics is more akin to the intricate traditional mirror art works that are fragile yet resilient. Although there is a unified structure created by the artist, it looks different from every angle depending the reflections of light. More significantly, as observers look into the mosaic of mirror shards, they find different reflections of themselves, thus changing the very essence of the piece.

The dust hasn’t settled yet on the outcomes of these protests, and emotions are still running high. Yet if past events are any predictor of the present, it would be erroneous to assume that they will result in either the status quo remaining or the hardline reasserting control. In other words to appreciate and understand the impact of such generational protests, it is important to take the long view. 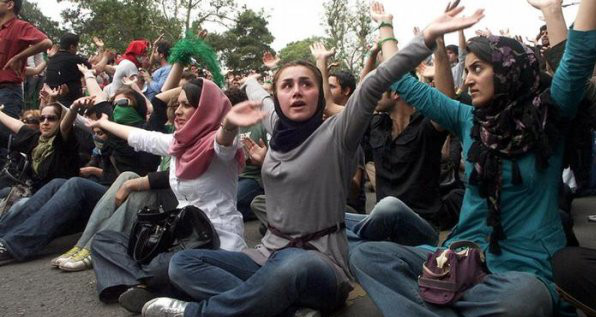 A History of Protest

Iran’s history of public protests date back well over 100 years. But since the 1979 revolution, and particularly since 1999, each generation that has come of age has also let out a visceral cry against the oppressive weight of a state that seeks to control not only the public space and politics, but private thought and social norms. In the absence of inclusive governance or a sustainable civic space, public presence in protest or other forms is the language by which society prompts the state.

In 1999, the student dorm protests in Tehran quickly spread. It was in the early days of the Khatami administration, and the clampdown that came fast and furious tainted him. Although it’s impossible to know how many lives were destroyed by imprisonment, torture and exile, the protests did prompt change.

Despite every attempt by hardline forces to discredit and undermine the president, the Khatami presidency laid the foundations for civic reform: from opening space for the press and fostering non-governmental organizations to instigating a large-scale decentralization program to give more voice and power to local provinces. In every instance ordinary people—youth, women, and minorities—grasped at the opportunities to widen the space as much as possible and assert their voices. There is still far to go, especially given the uptick in recent pre-protest attacks on the Bahai and a Jewish synagogue. Those eight years did not bring democracy as form of governance to Iran but they did reform society. The legacy was the blossoming of a democratic and civic mindset among a critical mass of the population. Once known and experienced it cannot become unknown or erased.

Conservative forces, wary of the tidal wave of demand for social and political liberties, took advantage of the economic woes to surge forward in the Ahmadinejad years. They shut down much of the press and civil society. They sought to limit access to the Internet and social media. But try as they might, they could not completely suppress the ever-younger population’s demands for greater social and political freedoms and economic opportunities. The 2009 demonstrations that came in the wake of the disputed elections were dignified, peaceful, and insistent on a simple basic demand of “where is my vote?” But as the state wielded its weapons, the call on the streets also took a sharper tone against the Supreme Leader and the foundations of the regime.

Again the clampdown came hard, with lives destroyed and yet another outflowing of talented youth into exile. But those protests were also a profound wake-up call to the regime leadership. Their instinct for self-survival, coupled with the late Ayatollah Rafsanjani’s significant clout, forced an immovable leadership to move. So, in 2013, Hassan Rouhani appeared as the candidate of choice, with credentials among conservatives but enough credibility to represent moderation in the absence of Khatami.

The public also took a different tack. Instead of confronting the state head-on, the post 2009 generation opted to live their lives as freely as they could. A “life style” movement with women at its fore was born that became so mainstream that it could not be rolled back. In towns and cities this movement strikes at the very core of the Islamic Republic’s identity, because social control, especially pertaining to women and youth, has been a critical pillar of the regime, along with its anti-American stance.

That’s why Rouhani’s December 2017 announcement that security forces would no longer harass women with “improper hijab” was so significant. Between this move and the nuclear agreement, which led to Iranian officials negotiating and shaking hands with the erstwhile “Great Satan,” the architects of the regime and the revolution are remodeling two of the most defining pillars of the system.

Meanwhile, the political elite played their own games of tug of war—between moderate and hardline, reformist and principlist—in the media and on the national stage. So much so that the televised debates in the 2016 presidential elections tackled many of the most sensitive and taboo subjects of the regime. It is also widely reported that the protests in Mashhad were sparked by conservatives, who took offence at Rouhani’s statements on the budget and his accusations leveled at key opaque institutions led by hardliners that have acquired and managed billions of dollars in assets. But those who lit the spark miscalculated how fast the fire of protest and anger would spread—fueled in large part by the penetration of smartphones and communications apps— particularly among the young and the urban and rural poor. In the past, conservative forces relied on this swath of society to become their foot soldiers. But aspirations for a better life, which fueled revolutionary fervor in the past, are pushing people toward a different kind of change.

The recent protests encompassed economic grievances—specific to each town and locality—as well as frustration with the corruption and hypocrisy of the system itself. It is always easier to rally around grievances, but any vision of an alternative system, and more importantly any path toward achieving a new ideal, were either absent or muted in the reports that came through. Either way, the urbanites and intellectuals as well as the moneyed classes and the reformist movement’s political leaders were wary of joining the fray for fear of unleashing uncontrollable chaos.

With the protests quashed again, some argue that these events have strengthened the hand of the revolutionary guard. But the regime’s resilience in these past decades has not been simply due to the security forces. It is also because of its willingness to adapt to the changing currents of society. Rouhani’s statements insisting on attention to the economic and political grievances are indicative of this tack. He also acknowledged that shutting down social media is no longer feasible since thousands of people rely on the apps for their income and jobs. So, so something else had to give.

As in the past, the current crackdowns may appear to suppress demands for change and strengthen the status quo. But evolution is essential for survival, and the system will evolve. Since the protesters come from the segments of the population that hardliners have long taken for granted, these forces may find themselves on the defensive and thus forced to heed the call of reining in the shadow state. If foreign investment flows in with greater requirements of transparency, the stranglehold of corruption on the economy could also be loosened, allowing more independent businesses to flourish again.

This is a far cry from a true and inclusive democracy that many Iranians dream of. It doesn’t reflect the demands for citizen protection and adherence to the most basic standards of human rights. It also doesn’t yet answer the call for accountability that victims of this state deserve. But it is a step in that direction. Perhaps as importantly, it also avoids the greatest fear that most Iranians harbor: a sudden descent into chaos and civil strife. It is metamorphosis and evolution, not stagnation and sudden revolution.

As the trajectory of the past 38 years suggests, the change that comes will likely be positive. The riot gear and the security forces notwithstanding, the demands for more freedoms and economic dignity constitute the most powerful force in Iran today.

In the years to come, just as with the shape of the intricate mirror works, the façade of the state may remain, but what we see when we peer in will likely be inherently different to its present and its past.

This article was originally published on Lobelog