Protesters in Male demanding the implementation of the Supreme Court ruling

The Maldives Constitutional Crisis: A Power Struggle Between the Supreme Court and the Government

What’s been going on?

The political situation in the Maldives has been precarious for some years now.  And as human rights activists point out, much of the crisis is rooted in corruption.

A state of emergency was declared in November 2015, when the government said it was investigating a plot to assassinate President Yameen. Since he took power in 2013, freedom of speech and the independence of the judiciary have been jeopardized.  But human rights and democracy activists say the problems have other roots.  “Even prior to this incident, activists were harassed and arrested for voicing their concerns, or for resisting the government’s unlawful actions,” stated a rights activist who preferred not to be named for security concerns.

“Bribery is the name of the game for government to stop the activists from voicing out their concerns”, said the activist. The government also resorts to arrests, confiscating property, and other means of financial pressure, for example, “unofficial secret rulings to ministries to prohibit awarding any projects or businesses to those who are seen as resisting the government,” she declared.

Gasim Ibrahim, a leader in Jumuhooree Party, a businessman and a hotelier is being targeted. “Tourism is our main income earner and to do anything to disrupt it is dangerous, and yet armed forces went in the resorts of Gasim,” the activist said. Tourism accounts for a third of Maldives’ gross domestic product, and the island is visited by almost 1.5 million tourists each year for its luxury hotels, scuba-diving resorts and tropical seas. China, India, the US and the British Foreign office have issued travel warnings, while tour operators are reporting hundreds of cancellations since the state of emergency was declared.

There is also clear evidence of the government seeking to co-opt key figures.  Just before this incident Shidatha Shareef, a leading figure in the Adhaalath Party which supports former president Mohamed Nasheed, had her passport frozen for almost a year without reason. There were also attempts to co-opt her, as she was offered “any post at any place at any ranking” if she would stop voicing out concerns and join the government.

These recent upheavals were triggered by a Supreme Court verdict, on February 1st, that ordered the reinstatement of 12 MPs to their parliamentary seats.  This in effect would have enabled the opposition to restore its parliamentary majority.

The Maldives Attorney General advised national law enforcement to uphold the ruling of the Supreme Court.  But the tensions escalated and the National Defense Forces broke into and blockaded the Supreme Court, holding justices inside overnight. Three key figures, Chief justice, a Supreme Court judge, as well as the former President and opposition leader, Maumoon Abdul Gayoom – who is also Yameen’s half-brother – were arrested amid protests by the opposition. In addition, the government sacked the police commissioner for pledging to enforce the court ruling.

Meanwhile, Parliament was suspended, and the government suspended key articles guaranteeing constitutional rights, including the right to privacy, freedom of information, freedom to strike, freedom of assembly, as well as articles prohibiting unlawful arrest or detention.  The right to release the accused, and the right to appeal were also suspended under the state of emergency. 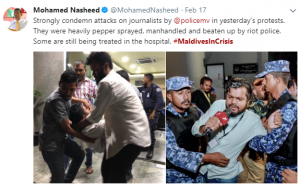 “Right now authority heads and political leaders are being arrested,” said Shidatha Shareef. “Police use force to disperse the crowds protesting on the streets. However, people are still attempting to organize protests and human rights activists are very fearful,” she added.

The media has also come under threat for covering events such as opposition rallies, stated Shareef.

“The continuation of this situation will obviously spread fear. What is happening here right now is against our constitution and international human rights standards, protocols and statutes. There is no security or space for rights defenders,” stated Shareef.

Shareef also voiced her concern about women in the political realm. She narrated how one of her female colleagues, the deputy leader of a political party, was arrested while she was in a rally. Police dragged her and took her into the police van. She was physically hurt and verbally harassed.

“How police treats the protesters will have a direct effect on women’s political participation,” Shareef asserted.

The international community has expressed its concerns about the recent escalations. Boris Johnson, foreign secretary of the UK, called on President Yameen to lift the state of emergency. The US National Security Council has warned in a tweet that “the world is watching” the Maldives, which has a population of 400,000 and depends on tourism to power its economy. The United Nations has urged the Maldives government to uphold the constitution and rule of law, lift the state of emergency as soon as possible, and take all measures to ensure the safety and security of the people in the country, including members of the judiciary.

“But our government doesn’t seem to be listening,” Shareef said.

What else can the world do?

The international community must do more than call for the Maldives President to uphold the law. Actions need to be taken to preserve the rule of law and the rights of citizens, especially with concerns over the rising violent extremism in the island. This issue drew international attention to the island nation last summer with the killing of a 29 year old blogger who had a strong voice against growing Islamic radicalization.

The international community must also consider the Chinese-Indian rivalry over influence in the Maldives, which became clear after Yameen signed up to China’s “One Belt, One Road” initiative to build trade and transport links across Asia and beyond. China has already deployed eleven warships to the East Indian Ocean amid the crisis, and while India’s influence has decreased since former president Nasheed lost power in 2012, the opposition in Maldives is calling for India to intervene.

The way out of this situation is travel bans and economic sanctions against government officials, believes Shareef. “Courts and parliament needs to function independently. International pressure needs to come in to make sure it happens,” says Shareef.