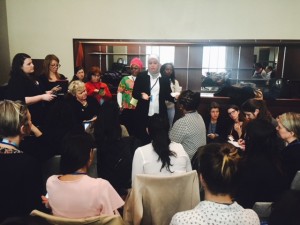 On March 19th, ICAN participated in an interactive panel co-hosted with CIVICUS and Women Thrive Alliance titled “Shrinking Space for the Feminist Movement”. The panel included seven speakers from seven different countries who rotated around the room telling their stories to small groups of audience members. Panelists were activists and women human rights defenders from Jordan, Tanzania, Nigeria, Colombia, Indonesia, South Africa and Zimbabwe. Each participant discussed the challenges she faces in her context and how she and her organization overcome those challenges.

The representative from Tanzania spoke about her work with the LGBTQI community and the barriers she faces because of a lack of constitutional reforms. Since discussing human rights in Tanzania is criminalized, they have created platforms for LGBTQI people to discuss the challenges they encounter and offer possible solutions, but steer away from framing it as a discussion on human rights.

The activist from Jordan touched on the barriers encountered by women human rights defenders in her country. She explains that the barriers include community attitudes because they believe that human rights defenders, particularly women human rights defenders, threaten the status quo. To address this, her organization decided that they must first begin working with the men in the communities. Another barrier they counter is the roadblocks in legislation because “the men in the communities influence legislation and aim to stop our work”, she says. To overcome this, she emphasized that NGOs must work together and share methods of best practice.

In Nigeria, the political situation surrounding civil society organizations (CSOs) and human rights is very different. The Nigerian activist explains that this is because there is a lack of space for civil society and especially women’s organizations since there is no freedom of expression or freedom of assembly. CSOs have been advocating against a bill that would criminalize them and thus far have been successful.

In Colombia, they have begun using holistic models in their activism. The activist from Colombia is a young woman, so she faces additional challenges as both a young person and a woman activist because “the government does not believe in the value of her work”, she says. Her goal is to create long-term sustainable projects, but “the government is only interested in in direct impact and if you cannot show it, they are not interested in your program,” she adds. To mitigate this, they have been focusing on economic empowerment programs.

The representative from Indonesia spoke of the barriers faced in this work, but specifically what indigenous women face in West Papua, Indonesia. The three main barriers stem from the state, culture and high rates of HIV. She says “the government does not care for indigenous people and West Papua remains the poorest province with the lowest development index”. She goes on to explain that culturally, women in indigenous communities face the highest rate of sexual violence. Coupled with a lack of education on their sexual and reproductive rights, West Papua has seen a high rate of HIV.

In South Africa there is a bill of rights included in the constitution, but women human rights defenders do not feel as though it is sufficient enough. They regularly face funding shortages, which is the main barrier to their work. They recognized that in many of the communities in which they are working, men are the heads of the communities and families. Like in Jordan, they found that “the men are the gatekeepers”, so they must first approach them. Once the men in the community are onboard, they found that the women began to take advantage of the programs available to them because there was no longer a community pressure dissuading them from participating. To further enhance this, the representative from South Africa reinforced that the government and private sector need to work together to push women and women’s organizations to fill the missing gaps.

Unlike the other contexts, the representative from Zimbabwe spoke of potential opening of spaces for women’s organizations. She says that before the coup in Zimbabwe, there were widespread human rights abuses and closing space for civil society. “Since the coup, there has been more discussions about democracy”, she adds. She views that it is the responsibility of activists and CSOs to hold the government accountable. Yet, there is a lack of funding for women’s organizations and there is high competitiveness amongst NGOs, which leads to compromised ethics on both the NGOs’ and donors’ sides. Her response to this is to push donors to direct funding to the grassroots organizations instead of relying on a trickle-down model of funding.

The event ended with the question “where are the feminists?” Today being a feminist is taboo, but as one participant put it, “we cannot compromise our feminist ideals. Women’s movements need to be feminist and we need to force policies based on a feminist model.”