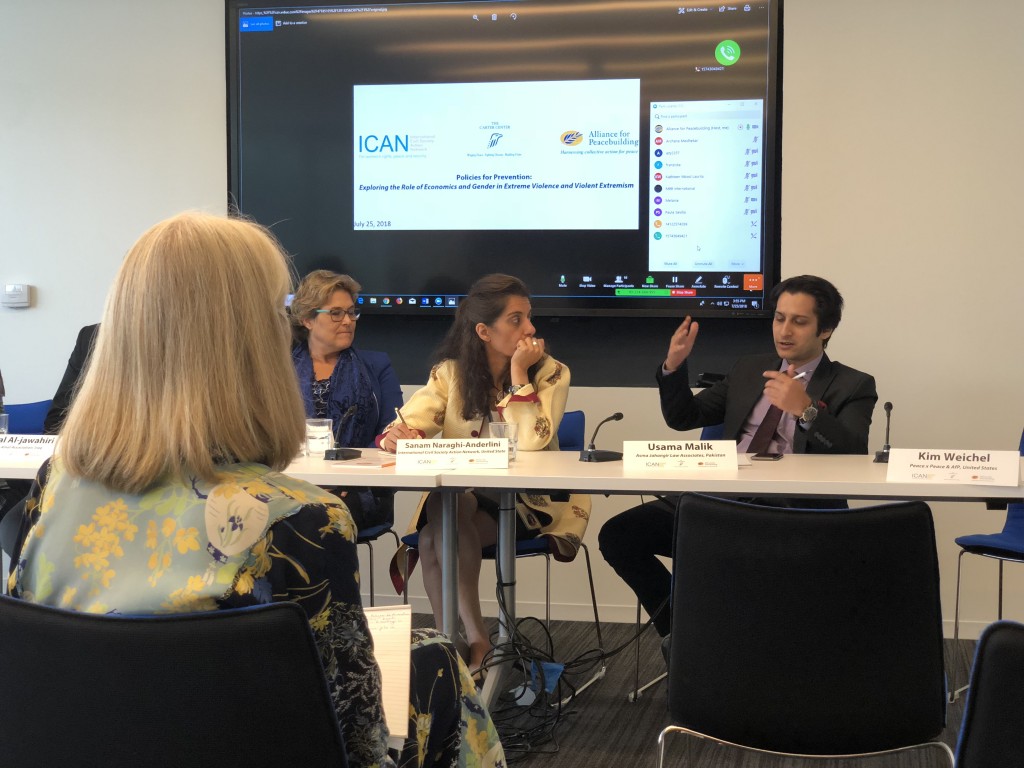 On July 25th, ICAN and  the Carter Center were hosted by the Alliance for Peacebuilding in an event titled “Policies for Prevention: Exploring the Role of Economics and Gender in Extreme Violence.” Speakers included ICAN Executive Director, Sanam Naraghi Anderlini, two of our WASL partners, Mary Akrami from Afghanistan and Jamal AL-Jawahiri from Iraq, along with Karin Ryan, Senior Policy Adviser on Human Rights and Special representative on Women and Girls at the Carter Center, and Usama Malik, a human rights lawyer from Pakistan.

The event was a follow up to the Carter Center’s Human Rights Defenders Forum held earlier in the week. The theme of the forum was “Restoring Faith in Freedom” and touched on topics such as economic and social rights, and building faith in institutions.

Akrami spoke of the importance of providing women with enough economic empowerment to begin their own small businesses. She also discussed the dire situation she is currently facing with funding the safe houses she has set up for women around the country, as international donors are refusing to fund them due to donor fatigue. She stated that the safe houses are the best thing that has been offered to women in Afghanistan in recent years.

“Women’s economic empowerment, empowers the whole community, which reduces violent extremism. I’m not an economics expert, but this is the only way for us to play our role.” – Mary Akrami, Director, Afghan Women Skills Development Center 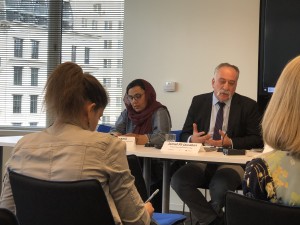 AL-Jawahiri expressed the importance of both economic and social rights, because economic rights feed into social rights. In Iraq, so much of the budget has gone towards the military, which means there is a lack of services provided by the government, especially in rural areas. Even given the setbacks Iraq has faced in the recent decades, there are some glimmers of hope. As technology has evolved, more and more people are connected to the internet, which provides them other means of networking. The strength of this has been realized, as it is a tool that can be used to mobilize and connect people.

“Empowerment for women is more important than before because we are seeing the results of empowering women. Women are committed and creative.”-Jamal AL-Jawahiri, Executive Director, Iraqi Al-Amal Association

Malik discussed the Pakistani context and his work defending and reinstating NGOs that have been shut down by the government. He touched on the worry that the space for civil society and NGOs is slowly shrinking in Pakistan. 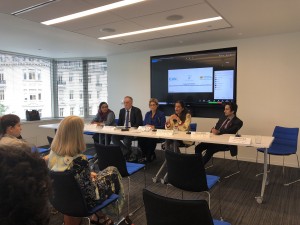 “Unless women have a higher level of empowerment, then they cannot be included in the economic policies.”-Usama Malik, Human Rights Lawyer, Pakistan

“It is the time now for us to embrace this idea of the indivisibility of human rights. To fight for affordable healthcare and other rights. Right now, we need to push for these things. Activists from around the world have evidence that this works.”-Karin Ryan, Senior Policy Adviser on Human Rights and Special Representative on Women and Girls, Carter Center 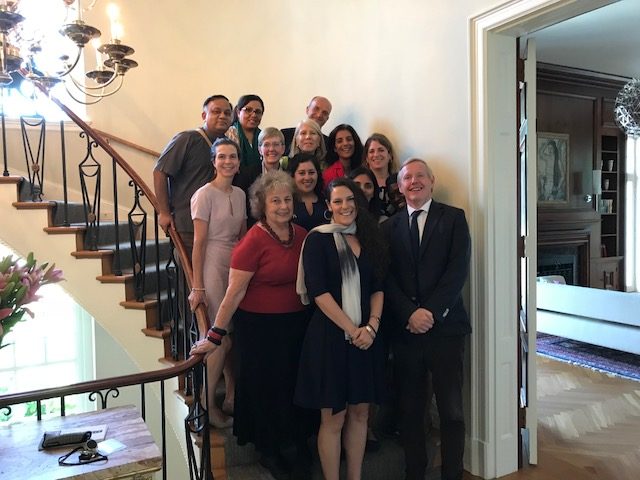 On July 26th, ICAN and the Carter Center Human Rights Defenders Delegation attended a lunch hosted at the Norwegian Embassy with Ambassador Kåre R. Aas. The conversation centered around the importance of women’s inclusion in peacebuilding and the ways in which Norway can continue to engage on a global level. We would like to thank Ambassador Aas and his staff for hosting us in their beautiful embassy!