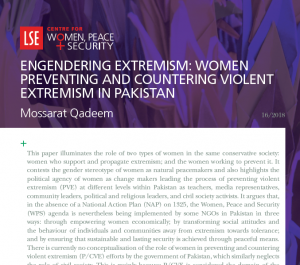 This paper illuminates the role of two types of women in the same conservative society: women who support and propagate extremism; and the women working to prevent it. It contests the gender stereotype of women as natural peacemakers and also highlights the political agency of women as change makers leading the process of preventing violent extremism (PVE) at different levels within Pakistan as teachers, media representatives, community leaders, political and religious leaders, and civil society activists. It argues that, in the absence of a National Action Plan (NAP) on 1325, the Women, Peace and Security (WPS) agenda is nevertheless being implemented by some NGOs in Pakistan in three ways: through empowering women economically; by transforming social attitudes and the behaviour of individuals and communities away from extremism towards tolerance; and by ensuring that sustainable and lasting security is achieved through peaceful means.
There is currently no conceptualisation of the role of women in preventing and countering violent extremism (P/CVE) efforts by the government of Pakistan, which similarly neglects the role of civil society. This is mainly because P/CVE is considered the domain of the military, which uses force to curb violent extremism. The decline in acts of terrorism was unimaginable without the use of military force but an inclusive and consistent approach is required for preventing and countering violent extremism effectively.