Members of the Women’s Alliance for Security Leadership (WASL) continue to receive awards and recognition for their important work worldwide. In the last month, the following members shared these accomplishments:

N-Peace, a UNDP initiative founded in 2010, recognizes the powerful stories of peace-builders and activists in the region who embody the women, peace, and security agenda. N-Peace presents up to 11 awards to grassroots activists, prominent campaigners, and up-and-coming young peace advocates. All recipients must have worked on furthering the cause of peace, gender equality, equal participation, and empowerment of women, in any of the following areas:  participation, conflict resolution, protection, and relief or recovery. 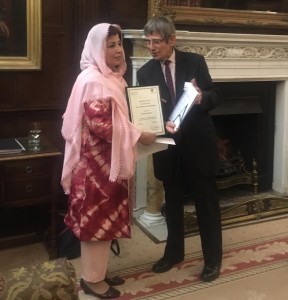 Najlaa Sheekh was a finalist for Peace Direct’s Tomorrow’s Peacebuilder Awards this year. Najlaa attended and spoke along with

other finalists at the Alliance for Peacebuilding conference in October. Her organization Kareemat, the first Syrian women-led organization in Turkey, has helped Syrian women refugees in Turkey with literacy, economic empowerment, and psychosocial support. Tomorrow’s Peacebuilders are global awards for local peacebuilding, which give international recognition to grassroots activists in conflict affected countries.

We would like to congratulate our colleagues and partners for these awards and are thrilled by the recognition of their valuable and impactful work.