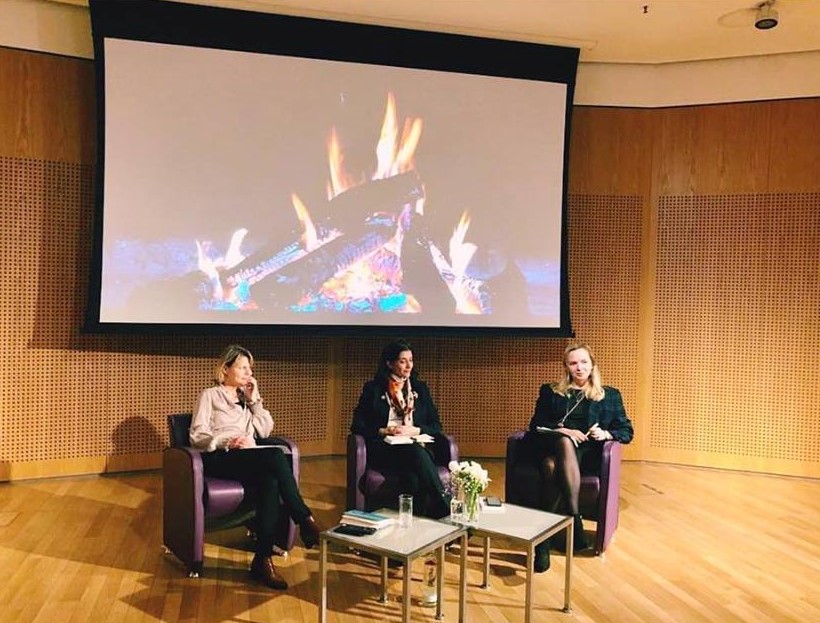 On 21 February 2019, ICAN’s Executive Director Sanam Naraghi Anderlini was a featured speaker at the February Fireside Chat, organized by the British Embassy in Berlin, the Center for Feminist Foreign Policy (CFFP), and frauen@diplo e.V.  She spoke about the current state of the Women, Peace and Security agenda, 19 years after UN Security Council Resolution 1325 was adopted.  While progress has been made, there is still much work to be done.

Ms. Naraghi Anderlini spoke about a variety of issues. She shared her experience on drafting 1325 and what was cut out by Security Council member states between the draft and the final version, including disarmament, prevention on conflict, and other issues.  She spoke about the importance of protecting peacemakers, and explained that grassroots partners need three kinds of security: political, for their independence; physical, to work without threats to their safety or that of their families; and financial, to continue the work they are doing. She touched upon sexual violence in conflict.

Ms. Naraghi Anderlini also spoke about nexus between gender, peacebuilding, and Countering/Preventing Violent Extremism (C/PVE), and why a gender perspective must be incorporated.  “All violent extremist movements are about identity at their core.  The theme they all have in common is misogyny: women are central to their agenda,” she said.  They all want to silence women, so to counter violent extremism we must elevate women’s voices, showcase the work they do, and celebrate pluralism.

She talked about her current work regarding the Afghanistan peace talks and the importance of having an independent women’s delegation at every peace talks.  Women have different needs and priorities than men, and often raise issues within society that others would not know or think about. “Currently, peace talks are about politics and power and weapons—no one at the table knows anything about society.  This needs to change,” she said.