“You Cannot Just Quit!” Fatima Al Bahadly Speaks in the US

ICAN was delighted to host Ms. Fatima Al Bahadly, Director of Al Firdaws Society, Iraq, and member of the Women’s Alliance for Security Leadership in New York City and Washington, D.C. last month. Al Bahadly’s groundbreaking work in Basra, Iraq focuses on deradicalization, peacebuilding and conflict resolution. For years, Al Bahadly has been demobilizing and reintegrating youth and children who have been recruited by militias, and working with moderate clerics to spread knowledge about the historical role of women and the inclusion of women in public life and leadership roles. 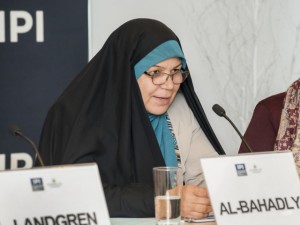 IPI Vice President, Mr. Adam Lupel, welcomed participants by reiterating the notion that the best predictor of a country’s peacefulness is how well its women are treated. “Women’s leadership is critical, and this work very much includes men as allies, as partners, and as self-aware and proactive advocates,” he said.

In her opening remarks,  Menéndez emphasized the goal of having more women negotiating at the peace table, making decisions in governments, leading their communities, and having an equal say in how we reconstruct society, heal from conflict, and prevent it. Speaking to the initiative at hand she said, “To be clear, the women who started, grew, and sustained this movement want the men to share the burden and recognize the effectiveness of having men speaking to other men about these issues.” She added the need for men “to step up to the plate asking, ‘how can I help?’ and actually listen to [women’s] experience and expertise.”

“Feminism is a smart policy which is inclusive, uses all potential, and leaves no one behind,” stated Chowdhury. “For the initiative being launched, all of us should take the vow to profess, advocate, work to ensure feminism as our creed and as our mission,” he added. 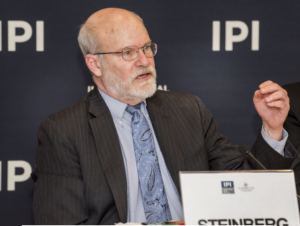 Steinberg, the champion behind Mobilizing Men as Partners for Women, Peace and Security, shared the background to the initiative. He spoke about the imperative of seeking to change gender power dynamics and address toxic masculinity. He also addressed the need to ensure that in launching this campaign men did not seek to dominate or supplant women’s leadership but to serve as allies, and as partners and supporters. Sharing his vision of how the initiative can use its connections and behind-the-scenes access to press for gendered peace processes and open doors for activists, Steinberg said, “Our goals over the next two years are quite simple.” He committed to engaging “with leaders of processes in Afghanistan, South Sudan, Yemen, and beyond to ensure they include women and other marginalized groups in negotiation and implementation bodies, and give full weight to their contribution.” Ensuring that UN Security Council resolutions and national laws, including the U.S. WPS Act (2017), are fully and transparently implemented will also be on the initiative’s agenda. “Finally,” he said, “we will support activists on the frontline of conflict to build their capacity and secure their personal security.”

Jacevic discussed his work on National Action Plans (NAP), which today amount to 81 world-wide. The key to successful NAPs, Jacevic said, is bringing people from various sectors—including women-led civil society—together in a room to decide on priorities and what peace should look like.

Al Bahadly expounded the context of Iraq and the current situation in her country, then she shared how in 2015 she initiated a dialogue between tribal leaders after a tribal conflict resulted in the kidnapping of 15 women. Using religious approaches, tribal traditions that honor women, and stories from the history of Islam about women’s inclusion in public life and their leadership roles in society, Al Bahadly was able to convince the men to work with her. “We had allies in moderate religious leaders who pressured the heads of tribes to end violations of women.” She  also shared her work with former Daesh fighters, stressing the importance of providing adequate support in order to prevent the cycle of violence. Recognizing the sensitivity of the fact that violence and the use of weapons are often acts perpetrated by men, Al Bahadly said that she believes it to be crucial to involve men in promoting peace. “Changing men’s perceptions through various activities and over long periods of time is of critical importance because we need men who are convinced and have the desire to actively promote the peace agenda,” she added.

“I’m convinced that men hear other men more effectively than they hear women,” Landgren said in the final intervention. “Like it or not, the world over, there seems to be widespread male discounting of truth spoken in a female voice. One way forward is more female voices, but for now—it galls me, but if we want effective communication and outreach, there need to be more male voices not simply relating the evidence but persuading others at a more visceral level of the value of women holding power.” 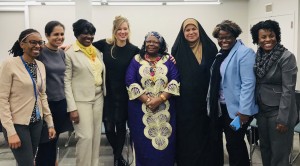 On March 13, Al Bahadly joined ICAN, the Kroc Institute for Peace and Justice (Kroc IPJ), and its Women Waging Peace partners Ms. Stella Sabiti and Ms. Mariam Yazdani to share her story at a discussion entitled Exploring: How Do We Build More Gender Inclusive and Effective Peace Processes.

Sabiti, Founder of the Center for Conflict Resolution discussed her work in Uganda, Yazdani, Senior Advisor at Viva Rio shared her experiences from Haiti and Al Bahadly spoke about her work in Iraq.

The conversation explored how the three women had gone about negotiating peace in their various contexts, what brought them to that work, and challenges as well as successes. Perhaps the most striking thread between their stories, which focused on Haiti, Iraq, and Uganda, was the importance of not forgetting the humanity behind every person, even those who commit terrible acts of violence.

Southern Iraq, where Al Bahadly is based, has long been an epicenter for tribal conflicts and the battle ground for various political parties and radical Islamist groups. With the collapse of security, the control of armed organizations, and expansion of tribal power and extremist parties, the problems have intensified. Simultaneously, the need to address them in a structured and analytic way have also become evident. The issues range from the recruitment of child soldiers, illegal arms sales, and the persecution of women. Women are often marginalized, denied access to education, married off at an early age, and unable to participate in politics. Early on, Al Firdaws Society started working to protect women and girls affected by war, strengthen their role in peacebuilding, and raise awareness about violence against women. 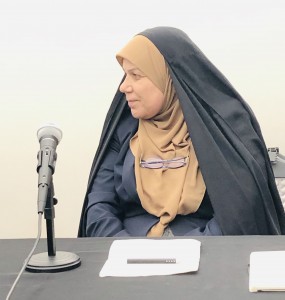 To answer the question of how she goes into communities to initiate peacemaking and connect with often radical militant men, Al Bahadly shared the story of how one of her family members joined a militia group. “I was devastated,” she said. “He started telling me everything is prohibited: the food we eat, the clothing I wear, and whether the money we have comes from halal sources.” Instead of reprimanding her son, Al Bahadly decided to understand what had happened to radicalize him. She watched the young men train and carry weapons, believing that the path to god is jihad which would grant them access to heaven. Al Bahadly decided to change this narrative. “I told them they can go to heaven by helping others, by planting trees, and building their cities.” But talking was not enough, so she convinced the men to visit children who had lost their parents in the war and to visit hospitals to speak to those who suffer, to the sick poor children whose parents cannot afford to buy them medicines. I told them that helping these people would grant them heaven and the love of God. “My appearance has helped,” she adds. “They have more respect for women who are fully covered. I tried convincing them that being fully covered doesn’t make a woman closer to God, only love and humanity do” Al Bahadly emphasizes the importance of persistence and continued communication with the community. “You cannot just quit,” she said, “and you cannot work without involving men. Men are an important part of the solution to our problems, we need them to be our allies.”