A Better Peace for Afghan Women

By Malalai Habibi and Helena Grönberg

Women’s perspectives and expertise are once again being largely sidelined in a peace process. This time it is the future of Afghanistan that is on the table. It is the responsibility of all parties involved to ensure that those who often are affected the most by conflict and discrimination are included at the peace table. The international community that often plays a facilitating role in peace talks around the world has an obligation to take the necessary steps to ensure inclusive and gender-responsive processes.

After more than a year and a half of talks between the Taliban and the United States, a peace deal was signed on February 29,  2020. Partly due to the exclusion of the Afghan government from the negotiations, many see the agreement as a withdrawal deal rather than one that will bring genuine peace to the conflict-affected country of Afghanistan. Concerns and questions were early on raised about the peace talks and the format of the deal, including its four main elements: 1) U.S. troop withdrawal; 2) Taliban counterterrorism guarantees; 3) Ceasefire and prisoner releases, and 4) intra-Afghan negotiations. The latter were initially due to start on March 10, 2020 following a swap of 5,000 Taliban- and 1,000 Afghanistan government prisoners. The process was halted repeatedly due to disputes over the release of a group of 400 Taliban prisoners—many of them convicted of murder, drug trafficking, and other serious crimes. The release of this group was the main discussion in a consultative Loya Jirga (grand assembly of Afghan elders) on August 7, 2020. The Jirga, attended by around 3200 people—700 of them women—concluded to release the remaining prisoners despite concerns raised both nationally and internationally that it would pose a threat not only to Afghanistan but to the world. The same concern was raised from the onset by women activists all over Afghanistan who came together to call for “no peace without justice.” “Releasing the criminals without any due process has no outcome for peace,” says Wazhma Frogh, Founder of Women & Peace Studies Organization (WPSO) and a member of the ICAN spearheaded Women’s Alliance for Security Leadership (WASL). She adds that international support for this call is crucial.

Following the prisoner swap, the negotiations between the two 21-member delegations representing the Government of Afghanistan and the Taliban respectively kicked off on September 12, 2020 in Doha. While the inauguration ceremony was publicly aired, there has been little information available since, and the negotiations have been held behind closed doors. The discussions so far have focused on agreeing on terms, conditions, and procedures for the formal talks. Most Afghan press has been repatriated to Afghanistan. The Afghanistan Ministry of Information and Culture has criticized the underrepresentation of Afghan media and referred to it as censorship, backward and Talibanist. The lack of transparency has also prompted many legitimate concerns about negotiating away the rights of women as well as those of religious and ethnic minorities.

Initially, five extraordinary women were among the 21 government delegates to the peace talks. However, only three of them traveled to the first round of talks in Doha, with the fourth joining later.  The fifth woman was removed from the list. This shrinking list of women has raised many questions and concerns, including why so few were included from the start and why one was removed. Women have long been at the forefront of responding to conflict and crisis while others have turned their backs on the Afghan population. Their relentless efforts and commitment to building a peaceful and just society is remarkable and their inclusion and perspectives in the negotiations of utmost importance. While the expertise and experience of all delegates should be the qualifier for participation, numbers are also telling. A larger number of women would practically and tangibly show the Taliban that Afghan women’s inclusion is a red line for all, including the government of Afghanistan.

For a successful peace process to take place, several clear steps have to be taken. Firstly, a nation-wide comprehensive ceasefire guaranteeing the cessation of bloodshed and violence would boost the Afghan people’s confidence in the process. It would prevent attacks such as the targeting of a maternity ward in Kabul on May 12, where 24 women, children, and infants were killed; the truck bomb  in Nangahar on October 3 which left 15 people dead and tens more wounded, many of them children;  and the suicide attack on October 24 in front of an educational center in Kabul, which left at least 24 dead and 57 wounded, most of them schoolchildren. An immediate ceasefire is imperative as the level of violence has increased since the start of the negotiations.

Secondly, an inclusive, transparent, and just process is key to sustained peace. This includes a delegation at the negotiations that represents the needs and concerns of all sectors of society. Lasting peace can only be achieved by ensuring that the voices and aspirations of everyone, including the most marginalized and excluded communities are heard. Past processes have demonstrated that women more often than not negotiate to achieve gains for all of society. They are often trusted in their communities, have local knowledge and are aware of security threats and needs of civilians. Their perspectives and expertise can inform important negotiation topics, such as land rights and police reform. Women also seek to ensure communication between the negotiating parties and civil society so that people are informed about what is happening at the table and can decide whether to support the process. 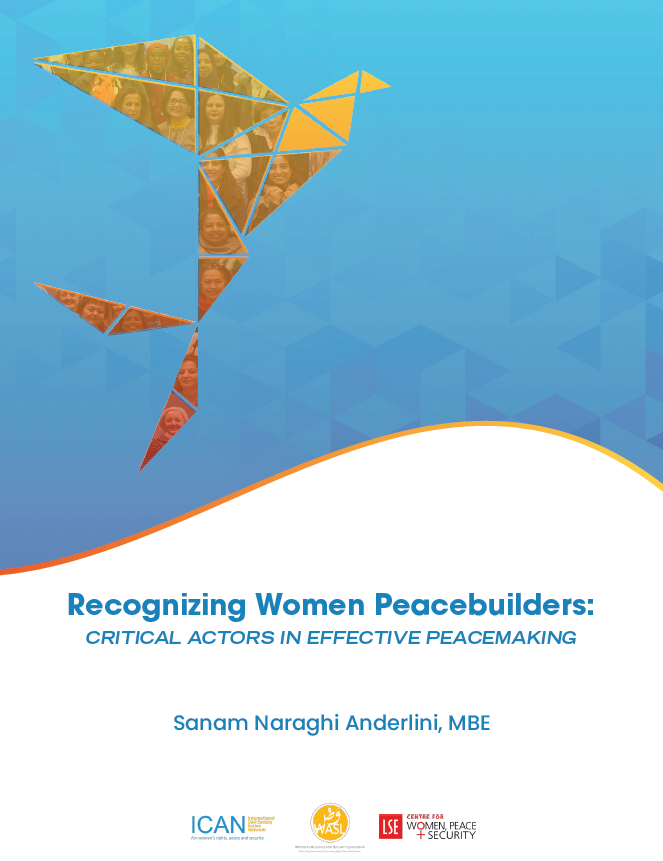 Given that the Taliban has a track record of particularly targeting and oppressing women, it is all the more urgent that women are at the table to defend their status and rights in the future of their country. The Taliban’s position on women has not changed in recent years and remains vague. Using a radical interpretation of Islamic law, the Afghan Taliban’s deputy leader Siraj Haqqani in an op-ed published in the New York Times, said, “the rights of women that are granted by Islam [will be] protected” in an “Islamic system” in Afghanistan. It is however, unclear what the definition of these rights are, and what form of Islamic system he referred to. Is it the same definition used two decades ago when women were deprived of all their human rights and beaten if seen alone outside their homes? While the government claims that it represents the interests of women, there are too many diverse interests at play, and the risk of a majority of men including former warlords with a history of abuse negotiating away the rights of women is too high.

In a recent event commemorating the twentieth anniversary of UNSCR 1325, Wazhma Frogh reflected on the need for independent women’s peace delegations noted that “[women peacebuilders] are working very hard to get an independent delegation of women to [the peacetalks] and have direct conversations.” She also emphasized the need for supporting women-led track two processes and formalizing people-to-people dialogues at the grassroots. If the women of Afghanistan continue to be excluded and their calls ignored, the outcomes of the negotiations are guaranteed to be weak.  Not only is any deal unlikely to address the peace and security needs of society as a whole or ensure women’s basic physical and legal protection, rights and dignity, but it will also jeopardize their onerous gains and progress achieved to date. Appealing to the international community Frogh continued “We are not asking for our international allies to fight our battles, we will do that ourselves, but we need the space, we need the opportunities to be there…”

Throughout decades of war, turmoil and conflict, Afghan women have not been silent. They have advocated for and succeeded in bringing change and improving the situation not only for themselves but all of society. Women have been extensively engaged in awareness-raising, networking, training, education, mobilization, and advocacy efforts. Throughout the country under the Taliban regime, Afghan girls and boys—some of them now young activists, practitioners, trainers and agents of change—were educated in the underground schools run by women.

In order to appropriately respond to the ever-changing situation and to have the most impact, Afghan women have long adapted their strategies to match the needs and availability of resources. More recently women are strongly advocating for their meaningful inclusion at the peace table. In 2018, out of 70 members of the High Peace Council (HPC), a government body working on reconciliation with the militant group, eight were women.  Unfortunately, their presence was largely ineffective; they did not have much decision-making power, were not taken seriously, listened to or consulted. In the 2018 roadmap for peace, President Ghani included three women in the 12-member-negotiating team. In early 2019, at the National Women’s Consensus for Peace,  3000 women from around the country expressed their demands, including calling for the disarmament of armed groups and an end to impunity. The women produced a 15-article declaration asking for a “quick ceasefire.” Around the same time, 700 Afghan women from across the country organized a demonstration in Kabul to demand that their hard-won gains not be traded away in the ongoing peace talks between the United States and the Taliban, a demand that has been unmet so far. On social media, Afghan women have organized campaigns and introduced hashtags such as Afghan Women Will Never Go Back, MyRedLine, and Time4Peace.

While women are affected by conflicts around the world, they still remain underrepresented or even unrepresented in decision-making processes that determine their future. However, a strong body of evidence shows that including women in political- and peace and reconciliation processes increases the chance of reaching an agreement and enhances the durability of such agreement. There is also no lack of guidance on facilitating inclusion. ICAN’s Operational Guidance to Guarantee the Participation of Women Peacebuilders in Track One Peace processes provides ten steps that facilitators of peace processes can take at each stage of the process to ensure an inclusive and gender responsive process. These include supporting independent women peacebuilder delegations and consulting with women peacebuilders to ensure that agreements do not enable, validate or reinforce violence, corruption, discrimination and exclusion. As we celebrate the twentieth anniversary of UNSCR 1325 this week, let us step up and match the words and spirit of the resolution with concrete action.