As we enter into 2021, much of our attention has turned to the impact COVID-19 has had on our everyday lives. One of the less mundane impacts has been the uptick in adherence to conspiracy theories and their link to violent extremism. Far-right extremist ideology in particular has found fertile ground in many countries amid the pandemic, and the movements embracing it are globally connected. Some of them, like QAnon¹ , have been labeled as domestic terror threats by the FBI or, as in the case of the Proud Boys, Atomwaffen, and others, even designated as terrorist organizations by Canada in the aftermath of the January 6th attack on the U.S. Capitol. A gender lens shows the similarities in how violent extremist groups across the ideological spectrum behave, recruit, and operate, and becomes clear and provides insight on how to prevent their spread. On January 28, 2021, during the weekly WASL community call, Dr. Mia Bloom and Shannon Foley Martinez joined us to share their expertise on far-right extremism, conspiracy theories, and the role of women and gender. 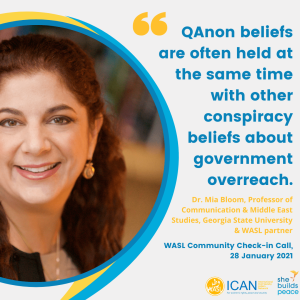 Dr. Mia Bloom, a WASL member, is a Professor of Communication and Middle East Studies at Georgia State University and a leading analyst on political violence and radicalization, in particular radicalization of women. Her research documents the weaponization of conspiracy theories during the COVID-19 pandemic. Lockdowns to stem the spread of COVID-19 have meant people spend more time online, where there has been widespread dissemination of far-right material linked to a number of violent crimes in the U.S. While the U.S. has been the most prolific QAnon content-producing country, there has been a considerable transnational influence and amplification of its false narrative. QAnon operates as a kind of meta-conspiracy theory, incorporating the local conspiracy theories wherever it lands, to become relevant and encourage adoption by the local population. “The problem is you only need a kernel of truth for a conspiracy to be blown out – there is no evidence but people still talk about it,” stated Dr. Bloom. In addition, Dr. Bloom noted that while the far-right movement may primarily be dominated by men, the attack on the U.S. Capitol revealed the role women play in radicalizing far-right extremism. Specifically, women linked to these groups are framed as “martyrs” or “patriots”, and are used to make the movement appear to be less threatening than it actually is.

“The problem is you only need a kernel of truth for a conspiracy to be blown out – there is no evidence but people still talk about it” – Dr. Mia Bloom

This resonates with the experience of Shannon Foley Martinez, a former white supremacist with decades of experience mentoring people leaving right-wing violent extremist groups and transforming the way we educate our children to build resilience to hate and violence. Ms. Foley Martinez grew up in a dysfunctional household that made her feel like a “black sheep with no sense of belonging”, making it challenging to connect with others. After she was raped by two men at a party weeks before her 15th birthday, she had no outlet to speak her truth and was left living with unprocessed trauma. As Foley Martinez explained, “When distrust is exacerbated in unresolved trauma, it can be difficult to find trust and credibility in the average person.” The self-hatred that stemmed from that unresolved trauma found a home in the Neo-Nazis’ rhetoric and violence. “I didn’t have the tools to process the trauma and my sense of not belonging, and the Neo-Nazi movement operated as a release valve,” she said. This adjacency to power draws both women and men to violent extremist groups, though their reasons for seeking it may be very different.

“When distrust is exacerbated in unresolved trauma, it can be difficult to find trust and credibility in the average person.” – Shannon Foley Martinez

Foley Martinez’s ideology began to shift when she was taken in by the mother of a skinhead she was dating. Instead of seeing her as a hate-filled white supremacist, Shannon was regarded as a human being who simply needed a place to stay. She then began the process of disengagement as she created a distance between herself and the ideology, and took the necessary steps to build back her life. Ms. Foley Martinez’s work now revolves around helping people disengage from violent groups and transform their lives for the better. She explains that trauma is a very essential part of stories that involve disengagement and that a huge amount of willingness and trust is involved for this transformation to take place, “the process of off-ramping requires investment, work, and a commitment to healing.”

Reflecting on commonalities between Foley Martinez’s story and those of women who join Daesh and Boko Haram, Ms. Sanam Naraghi Anderlini MBE, ICAN’s founder and CEO, asked “Is disempowerment and fear common across why we see women across the socioeconomic spectrum joining these movements?” 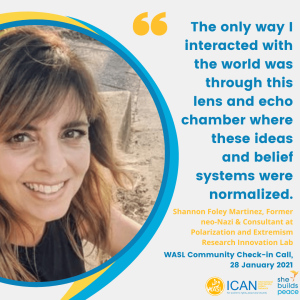 Explaining how gendered power relations came into play when she was a part of the Neo-Nazi group, Foley Martinez shared that during her days as a white supremacist, her relationships were abusive and she was exposed to violence by group leaders but she felt a sense of safety from those outside the group. In other words, the violence was protective and though she felt disempowered, it cast a safety net around her. One of WASL’s core values is transforming gendered power relations to promote equality, rights, and resilience against violent extremism. Foley Martinez’s transformational journey began when a woman provided her stability and gave her hope, leading her to completely change her belief system and help others transform theirs.

Foley Martinez envisions a future society where children are raised and taught with empathy and social skills needed to inoculate them to hate and violence. She recommended providing training and resources to those working in the community, including psychologists and school counselors, “What I would like to see, in terms of scalability, is the creation of an online repository of information that’s easily accessible, and has materials for psychosocial support networks – knowledge needed to keep children from turning to hate as a viable option.” Magda Zenon, a WASL member from Cyprus, added the importance of extending these efforts to peers to resounding agreement. “It would be nice to have a fresh conversation,” she said, “if the family is dysfunctional, the child can’t do anything.”

Violent extremism has existed for decades or even centuries by some accounts– it is not a phenomenon that originated in one country or with one religion – and yet the international community continues to associate the term with international terrorist groups such as Daesh and Al Qaeda. QAnon is a far-right movement that promotes violence and is extreme in its ideology and thus needs to be addressed as seriously as Daesh and Al Qaeda. This discussion illustrated once again the value of women exchanging experiences across cultures and contexts, because they reveal the gendered dimensions shared in common by extremist groups that may otherwise seem diametrically opposed. The insights and solutions that these women peacebuilders bring to transforming violent extremism are vital, from Indonesia to Nigeria to the United States.

¹What is QAnon? Certainly not a groundbreaking story, it has repurposed existing conspiracy theories that bear no evidence and are far removed from truth. Initially regarded as a fringe conspiracy theory, it was labeled as a domestic terror threat by the FBI and has fast traveled to the international arena. The QAnon oath is “Where We Go One, We Go All”, and followers swear allegiance to founder Q, a practice that has parallels to those of international terrorist groups such as Daesh.

Summaries of the rest of the calls can be accessed here

The WASL calls are held weekly on Thursdays at 9am EDT.