U.S. Policy in Afghanistan: What Withdrawal Means for Afghan Women & the Future 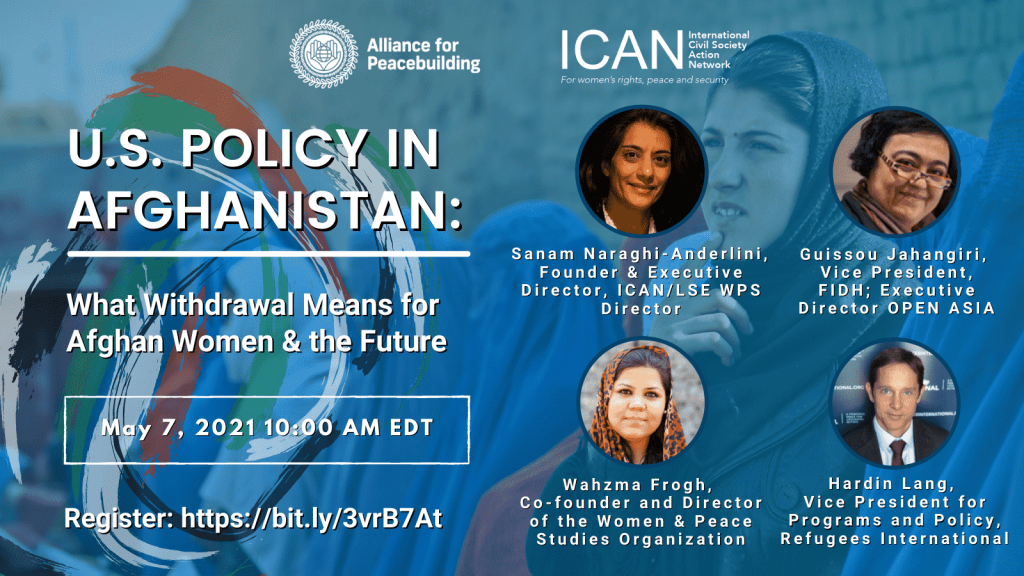 U.S. Policy in Afghanistan: What Withdrawal Means for Afghan Women & the Future

On May 7th, the Alliance for Peacebuilding (AfP) and the International Civil Society Action Network (ICAN) hosted a high-level discussion featuring key Afghan women and policy leaders long engaged in the situation in Afghanistan. In light of the announced military withdrawal of United States (U.S.) forces, the panelists discussed its potential implications on the peace process, the tremendous gains of Afghan women, girls, and minorities over the last 20 years, and potential humanitarian and refugee crises, as well as necessary measures to prevent a return to Taliban rule and regional destabilization.

Implications of Withdrawal on Afghan Women & the WPS Agenda

The U.S. enacted the Women, Peace, and Security (WPS) Act in 2017, which was followed by the release of the WPS Strategy in 2019, as required by the Act, and the implementation plans for the Department of Defense, Department of State, USAID, and the Department of Homeland Security in June 2020. From the outset, it was clear that Afghanistan was going to be the test case for the U.S.’s commitment to the WPS Agenda. In this test, failure is not an option. The lives and livelihoods of millions of Afghan women and girls are on the line.

Over the last 20 years of U.S. intervention in Afghanistan, Afghan women and girls have made phenomenal strides after the brutal conditions in which they lived under Taliban rule. Today, women and girls are agents of change–they serve as are parliamentarians, lawyers, government officials, engineers, teachers, entrepreneurs, and peacebuilders. No one group of people have more to lose from the potential collapse of the Afghan government and a reversion to Taliban rule. However, an entire generation has grown up with rights, and they will not be ceded easily.

U.S. diplomats must now abide by the WPS Act to ensure Afghan women’s meaningful participation in the peace process. One-off meetings with women are not sufficient–the U.S. must use all available levers of influence to facilitate women’s substantive engagement and the realization of the WPS principles, as required by law and policy. The U.S. must push back on Taliban interpretations of women’s rights under Islamic law that will result in their exclusion and subjugation. Afghan women are fighting for their rightful seat at the table in order to articulate their unique perspectives and solutions for durable peace–and the U.S. needs to give them that space. The U.S. cannot shirk its responsibility with respect to the support of women’s role in formal and informal peacebuilding process–it is required by the rule of law. The best investment the U.S. made in Afghanistan over the last 20 years was in support of Afghan women–it is now time to trust their agency and capacity to work towards a solution that works for all Afghans.

The Future of the Peace Process

The peace talks currently happening are not peace talks or a dialogue to create a functioning state in the immediate with a durable peace for the long-term–rather, they are conversations to shift the balance of power. Given the levels of violence in the country since the withdrawal announcement, it is clear that the Taliban achieved its main objective of jettisoning foreign forces from Afghanistan and is now attempting to seek a military advantage and a return to the conditions that prompted U.S. and international intervention in the first place. The U.S. legitimized the Taliban when it started direct negotiations with them; now the U.S. must be prepared to delegitimize the Taliban if they refuse to return to talks in good faith and stop the violent attacks against Afghan civilians.

However, options exist to put pressure on the Taliban and their benefactors, as well as to support the Afghan government and people despite the fact the U.S. has removed a critical point of leverage through its announced military withdrawal. For instance, if the Taliban is not ready to institute a long-term ceasefire, then the U.S. should pressure the Qataris to close their local office. The effectiveness of the Qataris as host to the process is in question. The appointment of a neutral mediator could ameliorate concerns and help ensure that  key issues other than power-sharing are brought to the forefront front of the talks, such as disarmament, demilitarization, and reintegration and transitional justice.

The Biden Administration has pledged $300 million in development assistance for Afghanistan. However, this requires the U.S., and Congress specifically, to maintain the political will of providing aid to Afghanistan beyond troop withdrawal and to ensure that it invests in local civil society and local stakeholders, who are in the best position to tailor programming and activities to the local context. Too often, international donor governments and organizations engage with local entities in a way that keeps them underfunded and subject to only minimal percentages of the aid allocated to their conflict. However, the U.S. must do more than just figure out how to improve the way money is distributed–it must develop a deeper dialogue with local actors about their priorities and needs in the development and humanitarian spaces over the short- and long-term.

Peacebuilding must go hand-in-hand with robustly funded humanitarian and development assistance. The needs of the Afghan people only become a bigger necessity as the combination of conflict, drought, and the pandemic exacerbate current conditions. Food, water, healthcare, and basic resources and services are people’s first priorities. Local organizations, particularly women-led organizations, repeatedly demonstrate their efficacy in addressing the emergency and long-term needs of their communities through a mix of peacebuilding and humanitarian aid. The U.S. should invest in the trust that they have already built in their communities, and include flexible funding for these local organizations.

The potential for a refugee crisis looms large as a  result of U.S. withdrawal and a correlated uptick in violence. The international community must rework the framework within which they deal with Afghan refugees. Europeans must undertake a reassessment of their policies towards Afghan refugees. Currently, many are being deported back to an increasingly dangerous situation in Afghanistan. In particular, Turkey must provide the same rights to Afghans as Syrians.

Furthermore, Pakistan and other regional countries must work together to provide the necessary resources for Afghans fleeing the volatile situation in Afghanistan. While the U.S. should immediately increase the number of available Special Immigrant Visas (SIVs) for Afghans that worked for the U.S. military and government, it must take a global approach by coordinating and supporting the international protection framework for refugees and increase humanitarian assistance both in Afghanistan and the countries to which they are and will increasingly be fleeing.