To Address Extremisms In The New Decade, Do What The Women Say

A gendered analysis by Rosalie Fransen of emerging trends and threats in the counterterrorism and countering/preventing violent extremism landscape. 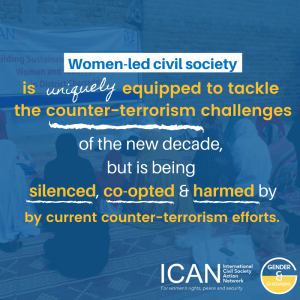 If 2020 was a year of stocktaking and questioning the status quo, 2021 invites us to put our reflections into action – so, too, for the counterterrorism (CT) and preventing and countering violent extremism (P/CVE) community, as it grapples with a world that is both increasingly connected and pluralistic, and unequal and divided.

The United Nations is currently convening its second virtual Counter-Terrorism Week, a gathering of member states, civil society and private sector organizations that comes on the heels of the 7th review of the General Assembly’s United Nations Global Counter-Terrorism Strategy (GCTS). As this year marks 15 years since the adoption of the first GCTS and the start of a new decade of CT and P/CVE work, events naturally focus on assessing trends and threats, and addressing emerging challenges.

At the International Civil Society Action Network (ICAN), we offer our own perspective on the CT and P/CVE landscape. Below are some of the key challenges and opportunities we have noticed in the extremisms space, analyzed through a gender lens, and rooted in the experiences and observations of our partners, particularly members of the Women’s Alliance for Security Leadership (WASL) network.

Threats and challenges we have observed in our work on gender and extremisms:

1. Co-option and exploitation of civil society. Although civil society actors are increasingly being acknowledged in CT and P/CVE rhetoric as critical partners, they continue to be silenced, co-opted, and exploited at national and international levels. Engagement of civil society often starts and ends at inviting them to speak at events or acknowledging their contributions verbally. Funding for the work of grassroots civil society on extremisms remains scarce, and opportunities for meaningful engagement in policymaking and programmatic decision-making are rare. Meanwhile, vague and overreaching CT legislation has led to the closing of civic space and repression of civil society activity in the name of national security.

Women peacebuilders, who already carry significant risk due to their willingness to work across divides and challenge power structures, are particularly impacted by these legislative measures. Their work remains underfunded, unrecognized, and unprotected. Our partners have reported issues with opening bank accounts, delays in financial transactions, and oppressive administrative requirements – sometimes leading to the suspension of projects.

Fionnuala Ní Aoláin, the UN Special Rapporteur on the promotion and protection of human rights and fundamental freedoms while countering terrorism, recently called for the need for “profound recalibration, restraint, and meaningful oversight of counterterrorism practices,” lest they continue to be misused to target civil society actors. Addressing the challenge of violent extremism will require upending current power dynamics and putting women peacebuilders and other local actors at the center of our discussions. As a start, ICAN has issued guidelines on how to protect, recognize, and fund the long-term capacity of women peacebuilders.

2. Silos and technocratic solutions. Due to a growing body of research by the UN and many others, we are well-aware of the structural drivers of violent extremism: overly-securitized responses, inequality, poor governance, corruption, exclusion, marginalization, and shrinking civic space. While several global agendas focus on tackling these drivers, namely the CT and P/CVE, SDG 16, human rights, and women, peace, and security agendas, siloed approaches to their implementation have stagnated progress. For instance, while good governance sits at the heart of the SDG16 agenda, it is often left out of P/CVE discussions, with governments failing to acknowledge their own role in institutionalizing racism, inequality, and exclusion. The same is true for human rights issues: although abuse by the security sector has been found to drive radicalization to violent extremism, governments continue to rely on overly aggressive security approaches in their CT responses.

3. Failure to express what we are “for.” Violent extremist groups are excellent communicators. They paint a clear picture of how the world ought to be and offer a sense of belonging and agency to those willing to join them to realize their vision. Meanwhile, the CT and P/CVE community still struggles to offer an alternative vision, instead taking a problem-oriented approach by expressing what it stands against: “preventing” and “countering” violent extremism. To move towards a truly transformative agenda, as our CEO Sanam Naraghi-Anderlini has argued, we will need a conceptual shift to define what we aspire to. In 2020, global activist movements like the Black Lives Matter movement demonstrated the power of expressing such a positive vision, rallying millions across the globe to fight for freedom, liberation, and justice.

To this end, ICAN proposes the international community adopts a framework of peace, equality, resilience, and pluralism (PREP) as an overarching goal, encompassing CT and C/PVE efforts: 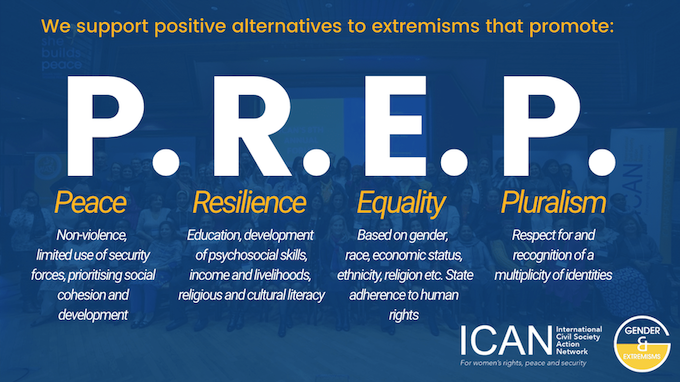 Trends and opportunities we have observed in our work on gender and extremisms:

1. Extreme pluralism and the importance of identity. Over the past decade, migration, urbanization, and globalization have created increasingly pluralistic societies. Growing pluralism has prompted internal crises for individuals, communities and countries who fear losing national identity, status, and an understanding of where they fit in the world. Extremist movements capitalized on this new reality: they elevate one identity (religion, ethnicity, nation, gender, class) over all others, fostering exclusion and division. Extremist ideology is always gendered, promoting rigid notions about the role and status of men and women, based on masculine supremacy and the subservience of women. Young people, who increasingly possess multiple, complex, layered identities, are particularly vulnerable to the sense of belonging and clear-cut explanation for the world that extremist groups provide. Indeed, identity-seeking has been identified as a key factor in individual radicalization to violent extremism.

In our responses, we have an opportunity to articulate an alternative vision: one that fosters pluralism and respect for the multiplicity of identities. In CT and C/PVE work, identity considerations are relevant at all levels of intervention. At the national level, education can serve as a means of promoting respect for multiple perspectives and identities, and teaching history that covers the experiences of marginalized groups. At the community level, civil society can promote religious literacy and interpretations of religious texts that emphasize common humanity. At the individual level, rebuilding identity is a critical part of reintegrating former extremists into their society. Women peacebuilders are well-positioned to lead on these identity-driven interventions, since they are locally rooted, have the trust of their communities, and understand the context and cultural nuances of their settings. Their work engages people’s core identities, by touching both hearts and minds.

Women peacebuilders, including members of WASL, were the first to notice signs of rising extremisms in their communities. They rapidly shifted their work to meet this new challenge, filling vacuums left by states by providing health, social and economic support.  In Afghanistan, for instance, a WASL member established a men’s network that grew from 20 to 300 members. The network shares information about COVID-19 with local communities and works to prevent extremism, discourage early marriage, and promote women’s participation in local councils. In Cameroon, women peacebuilders integrated community dialogues and psychosocial support into their humanitarian response to COVID-19, which enabled them to detect early warning signs for radicalization among youth.

The COVID-19 crisis has demonstrated the importance of preserving the social fabric at the local level in times of emergency and re-emphasized the need to invest in and protect work at the grassroots, particularly work by women-led civil society, who have an ear to the ground and can shift their work rapidly to meet emerging challenges.

3. The power of on-line narratives. An explosive growth in internet users over the past two decades and a “digital surge” in the use of technology during the pandemic has left the world more connected than ever. While hyper-connectivity has enabled new relationships and linkages, it has also contributed to divisive narratives – notably, a rise in on-line extremist hate speech. As seen in countries such as Iraq, hate speech is highly gendered and often used to target female civil society leaders and women active in the public sphere, as well as minority groups like the LGBTQ+ community. Extremist actors use sexual defamation, accusations of allegiance to the West, and shaming as tools to silence and disempower women and minorities, in some cases leading to real-life violence.

Women peacebuilders play a key role in challenging divisive rhetoric by disseminating peaceful, gender-sensitive and positive narratives rooted in their local culture, religion, and traditions. Crucially, such narratives need to be disseminated by locally trusted interlocuters to be credible and culturally appropriate. Interventions that encourage physical connectivity across identity groups, such as exposing young people to the practices of religious groups other than their own, also serve as an important counterweight to the polarized on-line environment. Since this work exposes women peacebuilders to significant risk, it requires substantial investment into measures for their protection.  ICAN’s PREP framework of peace, resilience, equality and pluralism offers a useful set of values for the development of on-line narratives.