“Exist to Resist”: Survival and Activism under Occupation

The February 1st military coup in Myanmar brutally crushed dissent, and the crackdowns and killings continue. In May another resurgence of violence in Palestine and Israel brought renewed attention to this 54-year conflict. How do social activists survive and thrive when the tanks roll in, the bombs drop, the raids and the arbitrary arrests begin? These, among other questions, were discussed on June 29th at the fifth session of the Coming of Age of the Women, Peace and Security Agenda series, entitled ‘Survival and Activism under Occupation’, focusing on Myanmar and Palestine. 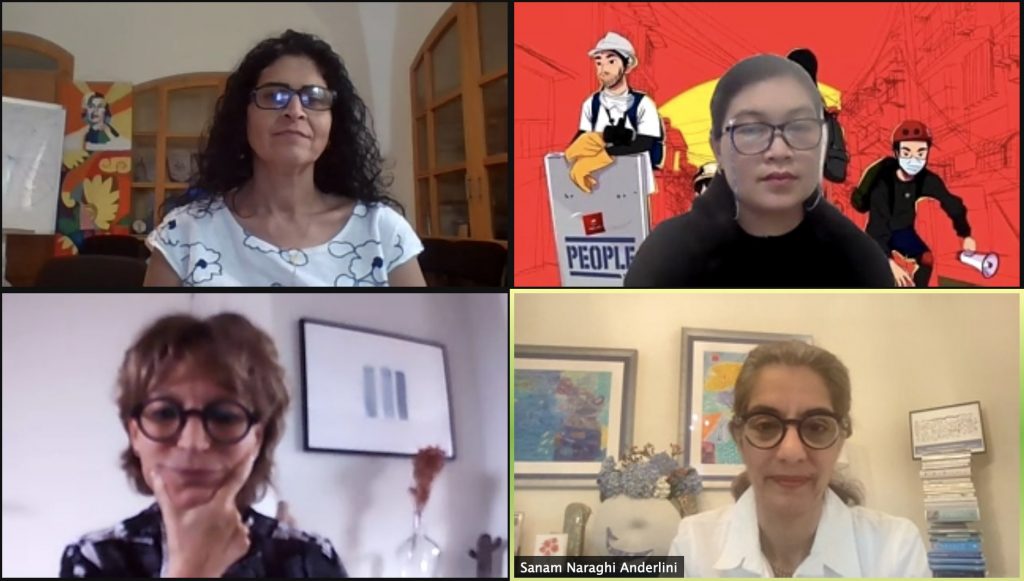 In these discussions, co-hosted by LSE Centre for Women, Peace and Security Centre, the International Civil Society Action Network (ICAN) and the Centre for Feminist Foreign Policy (CFFP), peacebuilders and activists from around the world join Sanam Naraghi Anderlini MBE, CEO of ICAN and Director of the LSE Center for WPS, for open and honest conversations in an intimate setting. In this session we hosted Agnes Callamard, Secretary General at Amnesty International and formerly the UN Special Rapporteur on Extrajudicial, Summary or Arbitrary Killings; WASL members May Sabe Phyu, Director of the Gender Equality Network (GEN); and Lucy Talgieh, Palestinian Council member and peacebuilder from Wi’am: The Palestinian Conflict Transformation Center.

No to Patriarchy, No to Oppression

“As a woman living under a patriarchal society there is no equity, there is no justice… how could I accept these norms? I became a revolutionist.” – Lucy Talgieh

The conversation drew on the implicit links between patriarchal oppression and broader militarized and political oppression. Each of the speakers explained how their experiences of patriarchal norms informed and propelled their journey into activism. Growing up in Myanmar as a religious and ethnic minority, May Sabe Phyu faced an intersection of discrimination, which was compounded by a militarized, masculine culture with limited space for women’s rights. Like May Sabe Phyu, Lucy Talgieh and Agnes Callamard both challenged male-dominated systems from a young age and became active feminists later in life.

“The fight for what you believe in, the fight for your people, your values and your country is very much who I am and was part of my childhood, education and family.” – Agnes Callamard

As the UN Special Rapporteur on Extrajudicial, Summary or Arbitrary Killing – with a mandate that she describes as “very masculine in its understanding” – Agnes Callamard was committed to questioning whether the human rights framework reflected women’s experiences of life and death. Referring to women’s death due to domestic violence, childbirth or lack of access to safe abortions, she explained: “I wanted to open people’s eyes and perspective to the fact that governments can kill even when they don’t pull the trigger, they can kill women through their laws and policies.”

The conversation moved to current life under occupation, which Lucy Talgieh in Palestine described as “living in a big prison… where all our rights are violated.”  She recounted how travelling to university and back to study for her master’s degree could take her up to 10 hours because she was prohibited from passing through Jerusalem. She faced continuous temporary check-points on the roads, and today encounters the same violation of freedom of movement when travelling for work with Wi’am: The Palestinian Conflict Transformation Center (Wi’am). At Wi’am she engages women in dialogue about empowerment, development and peacebuilding, and carries out advocacy to change articles of the penal code and customary laws. For Lucy Talgieh remaining in Palestine is part of her resistance:  “In order to exist you have to resist, through education and non-violent means.”

For May Sabe Phyu the right to exist safely in her home country of Myanmar, has been tragically stripped away. She described leaving Myanmar as the hardest decision she has had to make, but the situation became unbearable.  Women peacebuilders have had no choice but to leave in order to continue their activism and resist the military occupation.

“We might have left the country physically, but our minds, hearts and soul survive for the liberation of Myanmar, from this authoritarianism and tyranny of the regime.” – May Sabe Phyu

Women’s groups, including May Sabe Phyu’s organization GEN Myanmar, have been successful in setting up hotlines for women suffering from conflict-related sexual violence and violence related to their activism and protests. While working on emergency relocation for high-risk individuals, they have recognized a huge gap in the women, peace and security agenda for the protection of women peacebuilders and activists trying to flee sites of violence in Myanmar. She explained how the demand for safe houses vastly outstrips the supply, relocation funds are hard to access, and complicated political asylum processes are too time-consuming to be fit for purpose in an emergency.  As a woman human rights defender or peacebuilder the burden is doubled due to family duties they cannot easily abandon. In a powerful and moving message May Sabe Phyu made a plea for steps to be implemented to protect them. In response to her words, Agnes Callamard recognized that large international organizations involved in asylum processes often forget the trauma and pain of going into exile, noting “it is an important part of their story that we need to recall.”

The Paralysis of International Systems

“We are living in a world where the multilateral systems are not fit for purpose and the paralysis of the system is having direct impacts on life and death for people around the world.” – Agnes Callamard

A central theme of the conversation was the inability and incapacity of international and multilateral systems to play a meaningful role.  Sanam Naraghi Anderlini noted the hypocrisy in having numerous UN resolutions and statements when in reality, there is impunity for oppressor states. This was echoed by May Sabe Phyu who argued, “all these atrocities happen because militaries repeatedly get impunity for crimes against humanity.” She explained that people in Myanmar feel disappointed at the UN and the international community’s failure to act in response to February’s military coup. She emphasized that the people of Myanmar need to see concrete action and strong interventions, not more statements and condemnations, and asked “how many more people need to be dying for strong interventions to happen?” This sense of disillusion is felt strongly by the Palestinian people, who Lucy Talgieh believes no longer have any faith in global powers or UN resolutions that do not make a difference on the ground. The speakers also expressed their outrage that governments and private corporations continue to feed and enable authoritarian regimes for economic gain. May Sabe Phyu explained how civil society organizations have been calling on large corporations operating in Myanmar, such as TotalEnergies, to cease paying taxes to the military junta.

The Power of Solidarity

Looking forward, Agnes Callamard called on the listeners, comprised of civil society, activists and academics, to rethink what systems, institutions and mechanisms are fit for the 21st century. She asked: “How can we work together to build far more effective alliances and disrupt the paralysis so we can serve the people of Palestine and Myanmar?”

There was clear consensus that activists, civil society, and peacebuilders, have the potential to change the world. Both May Sabe Phyu and Lucy Talgieh emphasized how the unity and solidarity between women peacebuilders strengthens and invigorates their commitment to keep fighting for fair and equal societies, despite huge obstacles and challenges.

“We try not to die, when the regime wants us to die. This is our strategy; this is our revolution.” – May Sabe Phyu

If you missed the event, watch the recording here.