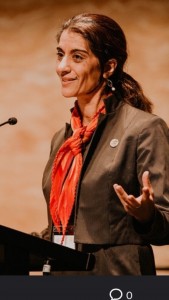 As Founder and CEO of the International Civil Society Action Network (ICAN), Sanam Naraghi Anderlini, MBE has over two decades of experience as a peace strategist working globally on conflicts, crises, violent extremism and peacebuilding with civil society, governments and the UN.

From 2020 to September 2022, Ms. Naraghi Anderlini served as Director of the London School of Economics and Political Science (LSE) Centre for Women, Peace and Security , working to deepen links between scholarship, policy and practice in women, peace and security agenda, and introducing the network of Women Mediators Across the Commonwealth (WMC) to the Centre.

Throughout her extensive career, Ms. Naraghi Anderlini has led groundbreaking initiatives in research, thought leadership, policy and practice. Key highlights include being a civil society leader, advocate and drafter of the seminal UN Security Council Resolution 1325 on WPS in 1999-2000; directing the Women Waging Peace Policy Commission in 2002-2004 with design and delivery of the first multi-country research initiative on the evidence of women’s contributions to peace processes; and publication of her book, Women Building Peace: What they do, why it matters (Rienner, 2007). Ms. Naraghi Anderlini designed and led the 10-country UNDP global initiative on “Gender, Community Security and Social Cohesion” as the first in-depth studies on the role and vulnerabilities of men in fragile contexts; she was appointed to the UN’s Standby Team (SBT) of Mediation Experts as the first Senior Expert on Gender and Inclusion working on Somalia, Libya and Syria, Sudan among other cases; and designs and delivers curricula on gender responsiveness in PVE and mediation for senior governmental, UN staff and mediators.

In November 2022, Ms. Naraghi Anderlini commenced an Andrew Mellon Fellowship at the University of Massachusetts, Amherst.  Since 2018, she has been an adjunct Professor at the Columbia University School of International Public Affairs (SIPA). She serves on the Steering Board of the UK’s National Action Plan on Women Peace and Security and Prevention of Sexual Violence, the Commonwealth’s Panel of Experts on Countering Violent Extremism (CVE), the WMC’s Steering Committee. Ms. Naraghi Anderlini also serves as Co-Chair of the Principles for Inclusive Peace Initiative.

Awards: In 2020 in recognition for her work and for services to international peacebuilding and women’s rights, she was awarded an MBE (Member of the Most Excellent Order of the British Empire). She was the 2016 Greeley Peace Scholar at the University of Massachusetts, and recipient of the 2014 UN Association Perdita Huston Award for human rights.

Personal: Ms. Naraghi Anderlini speaks four languages and holds an MPhil in Social Anthropology from Cambridge University. Iranian by birth she is a UK and US citizen, and has identical twin daughters.

Back to Our Team

To prevent the forever war turning into war forever, instead of an arms race and trillion-dollar defense spending, now more than ever we need to stand for and practice the principles of universal human rights, justice, and pluralism.

Where are the Women Peacemakers? (Le Monde Diplomatique)

Who should be but isn’t at the peace talks table for the many wars afflicting the daily lives of millions? Women. They do the work on the ground but are cut out of negotiations for peace.

Afghanistan’s country code is +93. My phone lights up—day and night. I cannot bear to answer, knowing I have no answers. I cannot bear to ignore them. “I hope you are not tired,” they say. “Sorry to bother you,” “Thank you for thinking of us,” and “If they find me, they’ll rip me apart, please take my children.” Their graciousness, dignity, apologies for disturbing our lives, to help save theirs, are humbling and haunting.

To Sustain Peace: Heed the Warnings & Prevent the Next War

By Sanam Naraghi-Anderlini
As the May 12 deadline looms for the US’s endorsement of the JCPOA, world leaders who claimed to support Mr.Guterres’ sustaining peace agenda, have a clear moral imperative: to stand by their words and sustain the peace for the millions of civilians in Iran and beyond who would pay the price if violence escalates.

Rise of Feminism & the Renewed Battle for Women’s Rights

“So 101 years on as March 8th 2018 dawns, how far have we come and how far do we still need to go?” Sanam Naraghi Anderlini writes about the battle for women’s rights

By Sanam Naraghi Anderlini
If past events are any predictor of the present, it would be erroneous to assume that they will result in either the status quo remaining or the hardline reasserting control.

Some 17 years after the UN resolution on women, peace and security, women make up just 5 percent of deployed blue helmets. It’s time to find the political will to upend the status quo.

Iran: The Change that Matters Is Happening Already

By Sanam Naraghi Anderlini and Sina Azodi
The change in the Iranian political sphere is prompted by the dynamic transformation of its social and cultural space since 1979. One of the best indicators of this transformation is the status of women, who have been key players all along.