The Innovative Peace Fund (IPF) enables ICAN to provide grants to our partners to support their innovative local solutions and enable women’s leadership in promoting plurality, peace and countering extremism.

We combine the grantmaking with technical assistance to strengthen independent local women’s organizations capacities in managing accounts and undertaking effective monitoring and evaluation of their work. We also provide strategic guidance and advisory support to innovate project designs. Furthermore, we connect our partners across countries and regions so they can learn from each other and share information on good practices and approaches. 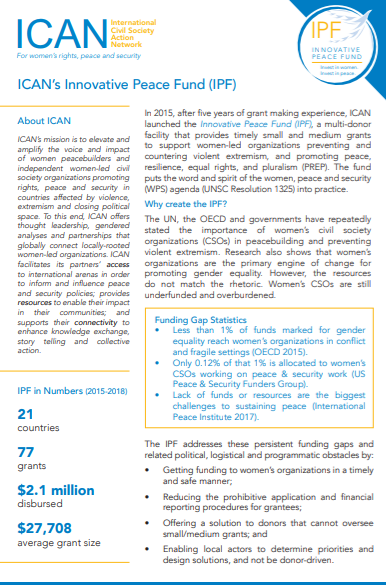 We trust our partners’ wisdom, judgement and assessment of the needs in their communities. We also acknowledge the commitment they have to their constituents and recognize that the trust and access they have is the most invaluable resource.  So the projects are always owned and led by our partners.

Our driving principle is to invest in that trust and judgment, because we believe and experience shows that the returns are immense and the impact of their work can be profound.

In return they trust us, as we offer strategic support and guidance to innovate and test new approaches.

As a result, the projects funded benefit from the comparative advantages that we each bring.

Our fund awarded $1 million in grants to 24 partners across 17 countries from Syria to Somalia, Colombia to Cameroon, Iraq to Indonesia & more.
Check out this 📽️ to see how ICAN’s Innovative Peace Fund supported women peacebuilders’ COVID19 response.

Identifying the right partners is key to our collaboration.  As the lead convener of WASL we are continuously assessing country situations and seeking relevant organizations to ijoin the alliance. We seek out independent women-led organizations that are actively promoting peace, equality, rights and pluralism in their efforts to end violent conflict, extremism and rising state militarism.   This includes organizations working locally, nationally, regionally and internationally. Our partners represent multiple sectors of society, from academia to media to government. IPF grants are directed at WASL partners.

We want IPF partners/grantees to be:

What the Partners Say:

“The issue is not just how much money is provided, it is about the quality of the partnerships.  If you empower people from the field and listen to them and support them, so much gets done.”

The projects and their impact

ICAN led a participatory pilot with 7 partners with similar values, agendas and purpose, in 6 country contexts who were involved in the design of the IPF.

ICAN supported Armanshahr Foundation in leading two initiatives to support maintaining the space for progressive voices in peace and women’s leadership. The Simorgh peace prize was awarded to women including national and grassroots activists. The 25%+ campaign led by young Afghan women was supported to maintain the quota for women in elected office. Key internationally known publications on women’s political participation were translated and a series of videos were made capturing the voices of renowned Afghan men and women articulating their vision of peace and coexistence for the future.

The Impact: At a time where insecurities are rising and civic space is closing, the initiative not only reasserted the voice of moderates but is putting progressive voices into the public realm.

Two initiatives were supported. In Basra, to prevent the recruitment of children, our partner the Ferdows Foundation led a project to involve youth in peace programs and communal activities and to encourage the return to school (for the younger cohort).  In addition, they convened Tribal Elders across the South to discuss the issue of “blood money” a practice whereby tribes exchange daughters to settle feuds.

The Impact: Within 3 months, there was a significant increase in participation in peace education and the number of returnees to school. The Elders signed a pledge to ban the practice of using women and girls to settle feuds.

In Kirkuk, our partner, the Al Amal Foundation found increasing tensions among Kurds, Shias and Sunnis within communities because of the influx of internally displaced populations and forced co-existence.

They conducted assessments and determined that civic and peace education were urgently needed in schools in the region, to foster greater respect along ethnic and religious lines and in terms of gender.  They developed a curricula but had no funds to pilot test them.

ICAN supported Al Amal’s plans to test the curricula in 3 communities among students, teachers and parents.

The impact was a changed dynamic between students and families of different sects and ethnicities, as well as greater respect for women. It was so positively received that the Iraqi government is now supporting nationwide usage of the curriculum.

Al Amal is continuing its efforts by taking the curriculum and adapting it to university settings including religious institutions.

ICAN supported Paiman Trust’s ongoing comprehensive approach to engage women and youth in deradicalization and rehabilitation efforts. Paiman also allocated small grants ($1000) to its volunteer mothers and youth community peace groups for them to undertake activities at their local level. They designed and implemented a mix of public theater performances, poetry and arts related activities that provided a public but safe space to discuss the spread of extremism and its impact on communities.

The Impact: As a result of the efforts, tribal elders now have greater respect for youth and women’s voices on extremism and community well being and there is a bottom-up mobilization of communities pushing back against the violence of extremist groups and the state.

ICAN supported Advocacy for Women in Peace and Security Africa (AWPSA) to strengthen the resilience of women and girls in Mombasa County, Kenya against violent extremism by helping them understand the drivers of radicalization and then identify strategies to counter it. The program involves collaboration with all local stakeholders, including the development of a structured platform where police sit at the table with women civil society to discuss the role of women in CVE, determine the “push and pull” factors of joining extremists movements, and strategize on how women can be involved.

The Mobaderoon network was supported to train women activists in peacebuilding efforts. In the Syrian context, Mobaderoon understood that women were very active in their communities, but they did not have the overarching frame of situating their peace and prevention work in a national and global context. The project helped community based women understand their roles and their relevance to the international level.

The Impact: As a result 5 national campaigns (e.g support to war victims, recognition of local peace heroes) were launched and a network of grassroots women peacebuilders with ties and presence across Syria are mobilizing to engage directly with the UN-led peace process.

In northern Nigeria, ICAN supported Hamsatu Allamin, a renowned civil society leader (working through International Alert as a fiscal sponsor) to launch a 15 week local radio campaign in Boko Haram affected communities. The program featured Islamic scholars who countered the narrative of Boko Haram regarding education and schooling. The show had a public call-in component as well.

The Impact: As a result of the campaign, school enrollment rose by 40%.

Our partner also initiated a series of community dialogues between different estranged communities- many stigmatized because of their association with Boko Haram – and local police and socials services.

The Impact: The dialogues reduced the fear between the communities, and paved the way for women to seek state services and interact more effectively with the police. A peace manual was also developed to be used in community peace clubs.

ICAN supported two partners, the Libyan Women’s Forum (LWF) and Art Cantara. LWF initiated workshops for Islamic scholars and women peace/rights activists from across the country. The project’s aim was to increase the capacity and understanding of counter extremists rhetoric among women, provide them with messages to respond to radical religious discourse and in support the role of women in promoting social cohesion and on going peacebuilding efforts.

The Impact: Using a handbook developed as a result of the workshops, the women have taken their learning into their communities and are disseminating the messages and building grassroots resilience against extremist ideology.

Art Cantara led trainings for recognized Libyan journalists teaching them objective journalism as well as challenging extremist messaging and gender sensitivity. Given the media fuels much of the animosity, this was a critical intervention.

The Impact: Journalists who attended are providing more balanced reportage and covering aspects of the crisis previously ignored.

ICAN supported Mobdiun – Creative Youth, a youth and women led organization with a focus on youth social inclusion and social transformation through arts, culture, sports and technology. Their focus is to promote alternatives for youth in communities at risk of radicalization. The current project involves conducting research on the living conditions of vulnerable youth and their personal relationships, in order to understand potential drivers of violent extremism in their immediate environment. The findings of the research will be used to structure a program that will help youth develop life skills and critical thinking abilities in order to peacefully lead the change in their communities and to develop recommendations for local and national stakeholders to take action.

Provided youth with a mix of religious literacy, communal activities and return to school

Launched a 15 week local radio campaign, featuring Islamic scholars who countered the narrative of Boko Haram, regarding education and schooling

Trained journalists in challenging extremist messaging and in gender sensitivity