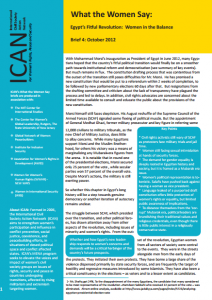 With Mohammad Morsi’s inauguration as President of Egypt in June 2012, many Egyptians hoped that the country’s fitful political transition would finally be on a smoother path towards institutional reform and democratization. But much remains in flux.

From the outset of the revolution, Egyptian women from all sectors of society were central to the events. They were in the streets alongside men from the early days of the protests. They initiated their own protests. They have borne a large share of the violence dispensed primarily by state security forces, and are frequently the target of hostility and regressive measures introduced by some Islamists.

Reflecting on the experiences of women in the uprising and transitional months, this brief provides a snapshot of developments in the past eighteen months including their security concerns, the constitutional process and evolving political landscape and its implication for women. It highlights key recommendations to international and domestic actors with regard to women’s rights, peace, and security.