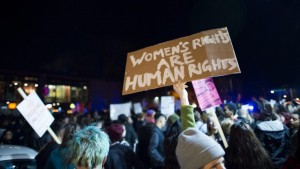 By Jolynn Shoemaker and Sahana Dharmapuri

The Chinese have a proverb: “May you live in interesting times.” This is also meant to be a curse. How true for 2016.

To the shock of many, a wave of populist backlash and economic fury led to Brexit in the U.K. and a campaign based on racism, xenophobia and fear has propelled Donald Trump to the White House. Meanwhile, we have witnessed millions of refugees seeking to escape horrific violence and oppression in their homelands and Syria has unraveled into a massacre of civilians while we watch, powerless, on social media and the world stands by without action.  We indeed live in uncertain, insecure and tragic times.

Today, in the United States of America, we need a feminist foreign policy more than ever.

The Context
Our Solutions
Our Reach
Our Stories