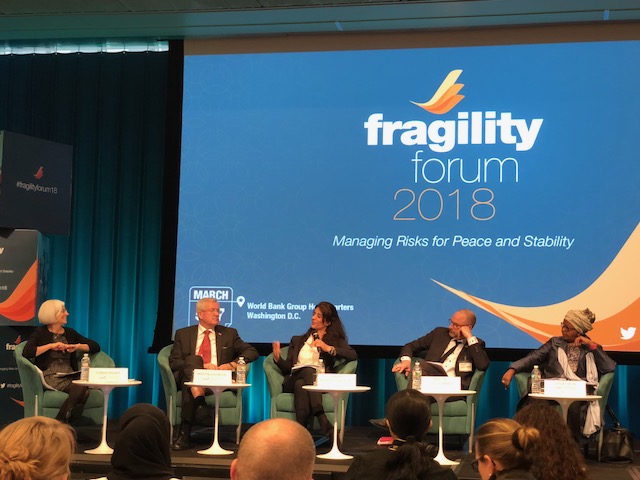 From March 5th to 7th, ICAN participated in the 2018 World Bank Fragility Forum, which featured a wealth of interesting sessions that our Executive Director, Sanam Naraghi Anderlini, and WASL member, Ahlem Nasraoui, participated in. World Bank president Jim Yong Kim gave the welcoming remarks, and said that frustrated aspirations are a social time bomb, and that incomes must grow to meet rising expectations. “We’d add that meaningful work is key,” he said. The opening speech was followed by plenaries and panels on topics ranging from investing in young people as risk managers and peacebuilders to nonviolent action in building inclusion and sustainable peace.

WASL member Ahlem Nasraoui participated in a panel hosted by Organizing Against Violent Extremism and Brookings titled “The Role of Development Institutions in Preventing Violent Extremism”. The panel was moderated by Eric Rosand, the director of The Prevention Project. He and the other panelists, including Alexander Avanessov, Jorge Moreira de Silva, Kimberly Brody Hart, Gloria La Cava, Rangina Jumakhonova and Nurudeen Lemu discussed the importance of development institutions in preventing violent extremism and how to involve civil society. In response to this engaging at the grassroots level, Ms. Nasraoui noted that “the government is sleeping,” so in order to bring about change, international institutions need to work with civil society and use their credibility on the ground.

“What I can ask from those institutions, because we need to work together, we need to collaborate on youth led organizations…This is an invitation to work together and push our governments to have more opportunities for young people so there can be more people like me to talk about peace.”

ICAN’s Executive Director, Sanam Naraghi Anderlini, was a panelist alongside Deqa Yasin Yusuf, Martin Bille Hermann, and Martin Dahinden at a session hosted by OECD-DAC INCAF. Titled “Gender Equality & Women’s Empowerment in Fragile Contexts,” the conversation focused on the nexus of economic policies and their link to violence, especially in relation to gender. The panel centered on the newly released OECD report of the same name. Ms. Anderlini brought in the perspective of civil society and the importance of including civil society when pouring funding into conflict zones. “Usually funding will go directly to the state with the hopes that it will trickle down, but if the state does not do so, then civil society cannot be built up and we lose on that social capital,” Ms Anderlini said.

“Mobilized women are often the first ones to respond. They are there, they do not us to empower them. They need us to listen, they need us to enable them.”

Sanam Naraghi Anderlini, along with Gary Millante, an economist from SIPRI, also discussed problems in the development world through a gendered lens during brown bag lunch titled “Broken Economics: What a Gendered Lens Tells Us About the Failures of Economic Policy in a Fragile World,” hosted by ICAN and SIPRI. The discussion focused around how  economic policy must be adjusted to context, yet we continue to see disconnects between technocratic economic solutions and the needs of fragile situations. Ms. Anderlini noted that the economic problem isn’t only about getting people jobs, it’s about dignity, political and economic policy, and the role of the state. While economic policies fail in some context, Mr. Millante gave the economist’s viewpoint, stating that economists will say that there is a break between economic policy and economic practice.  However, economists can’t say, “The theory is brilliant, it’s their fault;” we need them to help fix it.

“We need a conversation around what we will anticipate down the road: we know that we will lose jobs and societies are becoming more pluralistic, we need to think about our children growing up with acceptance and plurality as part of the education system.”