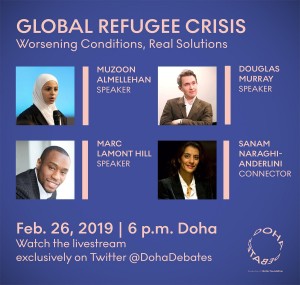 On 26 February 2019, ICAN’s ED Sanam Naraghi Anderlini will speak at the Doha Debates on the global refugee crisis. The debate hosted at the Northwestern University in Qatar is the first live event by the Doha Debates, and will be live streamed on Twitter.

The debut of the Doha Debates series will examine how best to solve the global refugee crisis, which has led to more than 25 million people being forcibly displaced across borders. The movement of people fleeing violence, persecution, human rights violations and natural disasters, and their obstacles to resettlement; a crisis considered to be one of the world’s biggest challenges.

The debate’s participants are: