“Families would call us [CSOs] and we inform paramedics” 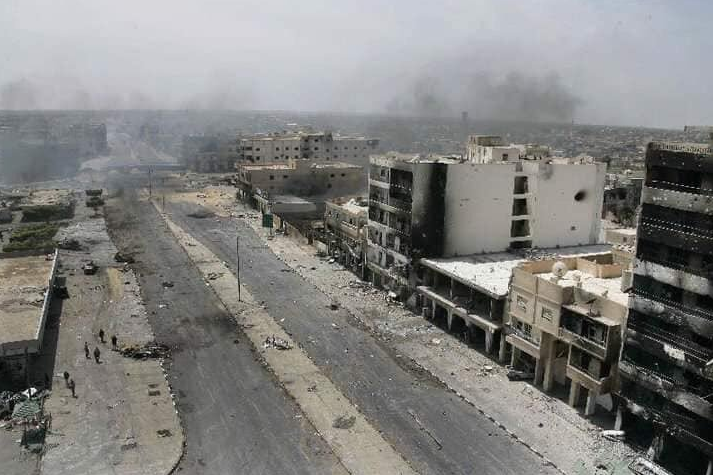 On April 4, General Khalifa Haftar advanced with his Libyan National Army (LNA) on Tripoli in an attempt to take over the capital from the UN-backed Government of National Accord (GNA).  Prime Minister Fayez Serraj who leads the GNA described the offensive as “an attempted coup”. Haftar has been slowly building alliances, and now has the backing of France, the United Arab Emirates, Saudi Arabia and Egypt. Serraj and the GNA have the backing of Turkey, Qatar, and Italy, however, the GNA’s army is an array of militias. Since Haftar’s advance on Tripoli neither side has backed down.

Three weeks on, more than 250 Libyans have been killed, over a thousand injured and more than 25,000 displaced. According to Doctors without Borders, thousands of civilians are trapped in conflict zones, while migrants remain held in detention centers and are “particularly vulnerable due to the inhumane conditions of the camps”.

Libya has been torn by violence and political instability since the NATO alliance with the UN Security Council’s blessing, ousted long-time ruler Muammar Gaddafi in 2011.  But world powers did not deploy a peacekeeping mission to Libya. So as the Gaddafi regime crumbled a security vacuum emerged and Libya become a cipher for militias from across the region.

UN mediation efforts between the rival governments of Libya and warring militias have been ongoing for four years but facing deadlocks throughout.  Prior to Haftar’s surprise advance on Tripoli, Ghassan Salamé, the UN special envoy for Libya was seeking a mediated solution between the two sides with the hope that they would form a government and unify state institutions, including the military.  As a means of ending the North African country’s eight-year crisis, the UN was planning a National Conference for April 14 to discuss a constitutional framework in advance of the presidential and parliamentary elections due this summer.

On April 9, five days after Haftar moved on Tripoli, Salame announced the conference was postponed. At the UN Security Council, on April 18 the British attempted to mitigate the crisis by proposing a resolution for a ceasefire. Russia and the United States joined forces to oppose the move. The division between world powers on the situation in Libya, and the inability to give a unified strong response, may be setting the stage for a wider proxy war between regional powers.

Meanwhile in Libya, civilians are yet again bearing the brunt.  In Ein Zara in Tripoli, people woke up to find missiles installed in the middle of residential areas in Tripoli. Residents asked the militias to remove them from between their homes, but they refused. Libyan media reported that overnight, the missiles were destroyed by very precise air strikes but it remains unknown who destroyed them.

“How can peace talks be successful when every group is heavily armed?”

According to Rida Al-Tubuly, Co-founder and director of the Tripoli-based Together We Build It organization (TWBI) and other civil activists, Libya is overrun with weapons, but UN did not implement a disarmament program prior to the peace talks. “Neither did the UN disarm the militias and the people, nor do they help in preventing new weapons from entering Libya despite the UN embargo,” she says. Libyan witnesses observed that the weapons they see in Tripoli are heavy arms in newer models, and not the old weapons left over from the days of Gaddafi. “Our borders are not well guarded. How can peace talks be successful when every group is heavily armed?”

Al-Tubuly also questions the reasoning behind not having Libyan women in the peace talks. “They are taking the easy way out, blaming cultural issues, but the reality is that Libyan women were involved in politics and used to go to military schools. There is no cultural barrier.  The UN is not insisting on having women in the peace talks, how can peace talks, ceasefire agreements, and monitoring conflict be successful and sustainable without women?”

Thuraya Al-Shawish, chairman of the Tripoli-based Al Manara for Rights and Freedoms and founder of the newly established Libya Al-Khair charity organization says that Haftar’s troops are “shooting civilian targets, including schools and hospitals, despite international law prohibiting the targeting of civilians”.

Haftar’s army is under investigation for war crimes. The UN Security Council tasked the International Criminal Court (ICC) to investigate war crimes committed after the fall of Muammar Gaddafi in 2011. Haftar’s Libyan National Army is one of the militias under investigation by the court.  Last year the ICC issued a warrant for the arrest of a commander in the LNA, Mahmoud al-Werfalli, who was accused of ordering and participating in summary executions of prisoners in Benghazi.  He remains at large.

On the other side, the GNA’s militias “are a poor excuse for security. They fight and draw weapons at each other. They terrorize civilians in Tripoli,” says Al-Tubuly.

At first the war was on the outskirts of Tripoli, and civilians would escape to the center of the city. Then the violence reached the center as well, and people started running to other cities east of Tripoli, like Zlitan, Al Khumus and Misratah.

At this point, Libyans just want peace. “People are saying they don’t care anymore who wins. They just want someone to win and unify this country. They say they need a proper police force for our security, a unified trained army, and a unity government. No one feels safe, not before the fighting broke out, nor after,” adds Al-Tubuly.

“The UN is not insisting on having women in the peace talks, how can peace talks, ceasefire agreements, and monitoring conflict be successful and sustainable without women?”

“Our [Women-led civil society organizations] main role now is to help civilians trapped in the conflict zones get out, provide them with shelter, food and medicines. We are doing everything we can to alleviate the suffering of people”, says Al-Shawish. Her organization is supported financially by the GNA and local businessmen.

The GNA and the Red Cross have also provided humanitarian corridors to evacuate civilians from Tripoli, which is being shelled, but the conflict lines keep shifting and evacuating people is a challenge. “Families would call us [CSOs] and we inform paramedics and those specialized in evacuations, who venture in and help people out. Our role starts once people are out”, says Al-Shawish.

From the frontlines of a conflict that has long been forgotten by global powers, the women of Libya demand the following of government and the international community: 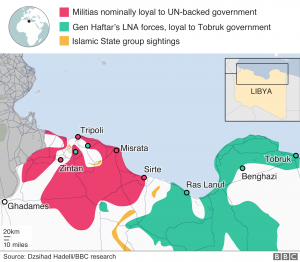 Who Controls What in Libya (Photo: BBC)

2012 August – Transitional government hands power to the General National Congress, which was elected in July. The GNC included 32 women (out of 120) after women activists put pressure and succeeded in re-drafting an electoral law which originally excluded them.

2013 July – Despite courageous lobbying for a minimum of 15 seats, women have only been granted 6 seats out of the 60 (10%) allocated for the Constitution Drafting Committee

Clashes continue, Islamic State takes over Derna in the east and attacks some oil terminals, fighting between the LNA and Tripoli-based militias continue.

2018 July – Khalifa Haftar claims that his forces are fully in control of Derna, the last Islamist stronghold in the east and the only city in the region hitherto outside his control.

2018 September – Libya’s UN-backed government declares a state of emergency in Tripoli, after dozens of people are killed in clashes between rival militia groups in the city’s southern suburbs.

2019 April – Haftar’s Libyan National Army advances on Tripoli, sparking clashes with the forces of the internationally-recognized Government of National Accord. 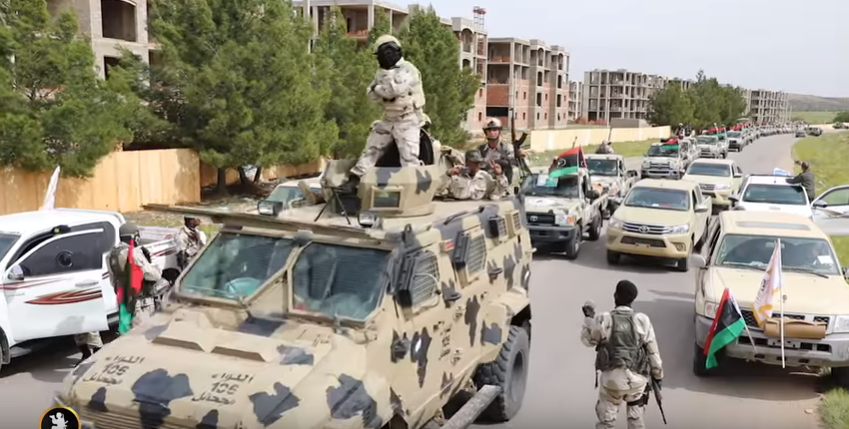 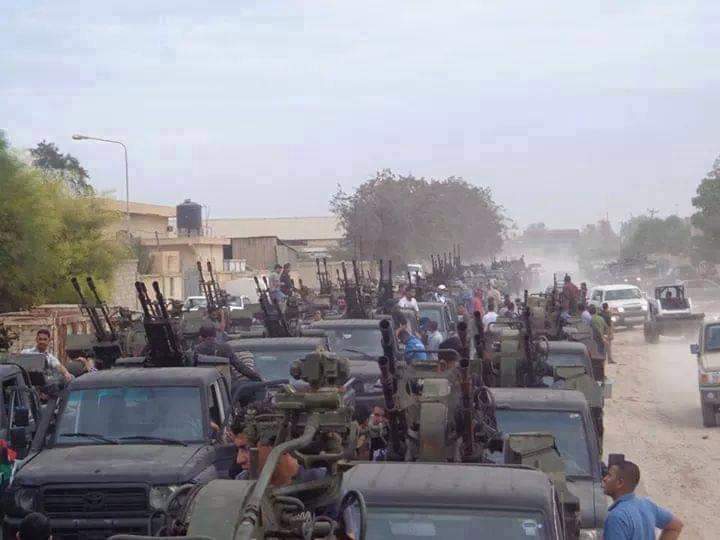 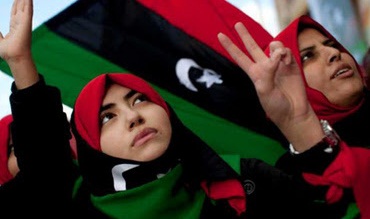 Read What the Women Say Brief on Libya (Fall 2013)

From Subjects to Citizens: Women in Post-Revolutionary Libya