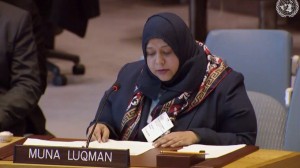 On April 15th, Ms. Muna Luqman, chairperson of Food4Humanity, co-founding member of the Women Solidarity Network, partner of the Peace Track Initiative, and WASL member has briefed the UN Security Council  and the Office of the Special Envoy of the Secretary-General for Yemen. Luqman provided a brief on the situation in Yemen since the Stockholm Agreement was signed, and shared her experiences living, working and surviving in Yemen. She called for an immediate, comprehensive ceasefire; disarmament, demilitarization, & demobilization; the restoration of the government; and the inclusion of women by all negotiating parties by no less than 50%.