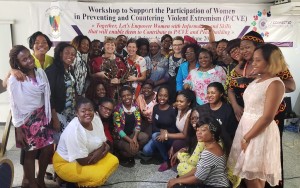 Participants and facilitators celebrate the successful conclusion of the workshop

ICAN facilitated a training on gender and preventing and countering violent extremism organized by the Commonwealth Secretariat’s CVE Unit, from 11-14 June in Douala, Cameroon.  The participants were comprised mainly of women civil society actors who have been working in various ways to address violence and build peace in their communities, among them were journalists, lawyers, religious leaders, psychotherapists, educators, youth workers and others. Joining in the training were representatives from several relevant ministries of government. The group was eager share their experiences facing security challenges in different regions of the country, in particular the far north where Boko Haram is active and the English-speaking northwest and southwest regions where there is an ongoing crisis stemming from separatist conflict and related violence.

WASL member Hamsatu Allamin, founder of Allamin Foundation for Peace and Development in neighboring Nigeria, joined ICAN Program Directors France Bognon and Melinda Holmes in delivering the training. Participants mapped existing PVE initiatives in Cameroon and analyzed them from a gender perspective and practiced designing gendered PVE responses drawing on the tools and examples shared by the trainers. The curriculum was tailored to the interests and needs of the participants, including an emphasis on the role of structural drivers of violent extremism and strategies for rehabilitation and reintegration. It also addressed the local context, including the issues with Boko Haram in the north, and the issue with the separatist in the north west and south west of the country.

Civil society has already been responding to issue of women returnees, long before the international community paid attention. 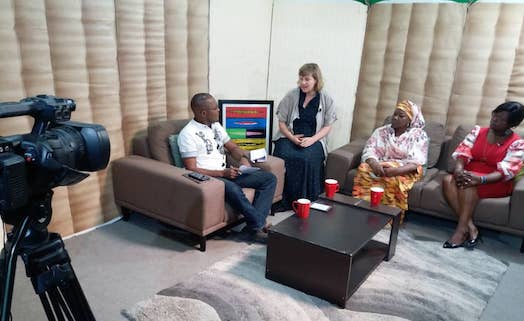 This issue of women and girls return from violent extremist groups is elaborated in the recent joint publication from ICAN and UNDP “Invisible Women: Gendered Dimensions of Return, Rehabilitation, and Reintegration from Violent Extremism”, which was launched on 12 June 2019 at an evening panel hosted by the Commonwealth Secretariat. Anna Sherburn from the Commonwealth Secretariat’s CVE Unit introduced the event which opened with remarks from Mr. Jean Luc Stalon, Resident Representative, UNDP Cameroon. A panel discussion followed between ICAN’s Melinda Holmes, co-author of the report, Ms. Hamsatu Allamin, whose work with women and girls returning from Boko Haram is presented as one of the case studies in the report, and Ms. Naomi Jean, a community worker who has been addressing these issues in the far north region of Cameroon.

The topic clearly resonates in Cameroon. Allamin and Holmes, along with UNDP Cameroon’s Julie Mballa, appeared in several local media outlets to explain how return from violent extremism is gendered, highlighting the vital role that women peacebuilders such as those participating in the training play in securing communities and preventing violence.

“There’s a role for everyone in society in order to make these women pick up the pieces, restart their lives, and help them to become contributing members of society.”