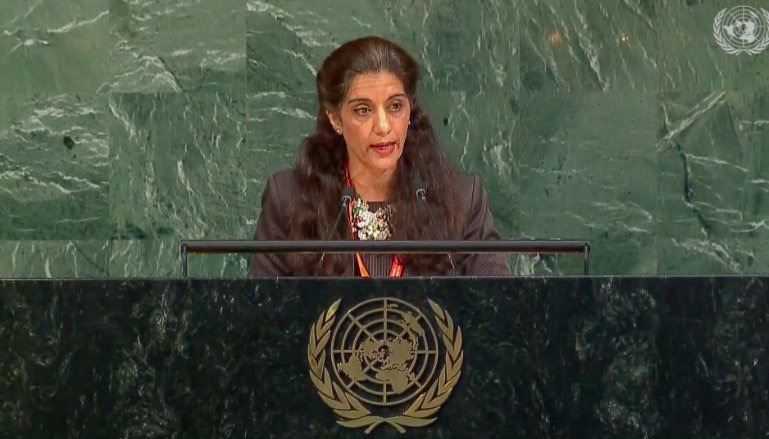 This morning’s theme is youth, technology and the use of the internet for terrorism – I’m your first speaker, so true to UN form and norms, I will embark on a somewhat different topic.

That of women and violent extremism.

Why? Because despite their supposed differences, the violent extremist movements we see today – From Boko haram and Daesh to White Supremacists and the Involuntary celibates– they all have one thing in common: They understand the power and influence of women, so they seek to control, coerce, co-opt and subjugate them.  When faced with vocal strong women leaders and movements, they strive to erase and silence them in the public arena. Because they know women will be the first to challenge their bigotry. Which means they must also fear women.

So I’m honored to be here on behalf of the International Civil Society Action Network (ICAN) and the global Women’s Alliance for Security Leadership (WASL) whose membership spans over 30 countries and includes the most courageous, strong, smart and strategically practical women in the world.

What do I mean by this?

Allow me to share a brief story as illustration:

Last year a group of women community peace workers, in a remote area of Pakistan where violent extremism was rife – who were trained in PVE by the Pakistani NGO and WASL member, PAIMAN Trust – alerted Paiman’s leadership to a group of local women who were sewing suicide jackets for their sons and selling them to the local extremist militia.

Paiman encouraged the sewing circle to attend its workshops and in a few months, taught them livelihood skills, the Quran’s precepts on peace and coexistence; their own traditions of pluralism and, how they, as women, could stop the bloodshed. The majority now volunteer as peaceworkers AND they earn better incomes.

Is this unique? No. We have countless similar stories of other Women’s Alliance members active in PVE and peacebuilding across 30 countries.

So what do they tell us?

First: Women have agency, aspirations and influence. They are not passive victims.

Yet here’s the tragedy: From ISIS to the white supremacists, they not only understand the power of women, they also see their utility. So, they target women to serve them and to produce their children. And they co-opt them to become their messengers, recruiters and fundraisers.

But why would women join them? Because – as one Boko Haram woman said: “There was 100% better treatment as a wife. There was better food…” Some who’d never been educated even welcomed the mandatory Quran classes as an opportunity to learn.

Here’s the irony. For years, the international community has issued soaring rhetoric about women’s empowerment, rights and dignity– but we have not delivered. And our failure has lead thousands of women to join movements that espouse their own subjugation and violence against others. Because they think it’s a chance at a better life.

So my first recommendation is, let’s deliver on the rhetoric of rights, peace and development.  We ignore women at our own peril.

Second:  Prevention is done locally. In our Pakistan case – a local women-led NGO with depth of expertise in deradicalization trained the volunteers who had access and trust in the community. They designed programs that are anchored in their religion and culturally relevant – we at ICAN provided the funds.

You need this expertise, these civil society organizations to participate and inform global & national Counter Terrorism and PVE policies & programs from start to finish. Not as a box ticking exercise, but to heed their wise advice.

Third: Violent extremist movements are effective because they’re locally rooted and globally connected across sectors. We need to be better at coordinating our local and global work across all sectors. ICAN’s partnerships with UNDP and some states here, that enable us to support WASL members, is a great example but there’s much more the UN and states could do.

Because neither we, as civil society, nor you – the UN or any government – can do this work alone. When states close civil society space, the radical and extreme elements flourish underground spreading intolerance and justifying violence. And when states embrace extremist ideologies of any type, they help unleash the forces of violence.

If prevention is the goal, we need a vibrant independent civil society sector anchored in human rights, able to dissent safely and engage constructively with you.

Finally, for 16 years our global discourse has centered around what we are against but the phenomenon of terror and violence has metastasized.

So my question for this 6th review of the UN Counter Terror Strategy is: WHAT ARE YOU – We – FOR? 17 years of the War on Terror and 2 trillion dollars later…

What positive alternatives do we offer?

What’s our vision and version of life that provides a sense of purpose, belonging, self dignity, and hope to our youth?

Ladies and gentlemen, we stand at a critical juncture. We can continue our siloed approaches and business as usual or we can collectively tackle the governance, economics, cultural and security issues that give rise to these extremisms.

As ICAN and WASL we stand ready to partner with you. We’ll bring our practical solutions – rooted in the practice of Peace, Resilience, Equality and Pluralism (PREP) – and we will not give up.

But will we continue to raise uncomfortable truths? Yes. Absolutely. Because we will not, we CANNOT let the next decade or even the next year of our lives be defined by either the violence of non-state or state-led extremisms.