“Women peacebuilders run to the problem when everyone else is running away,” said ICAN’s CEO and Founder, Sanam Naraghi Anderlini. This statement could not be truer of award-winning Cameroonian peacebuilder, Esther Omam. Esther’s career has seen her go from development worker to humanitarian responder to mediator and peacebuilder, in the South-West region of Cameroon. Esther has negotiated humanitarian access into some of the most remote and dangerous pockets of the Anglophone Crisis and in 2019, she successfully persuaded key non-state armed group leaders to lift a three-year school ban. Despite threats, rumor-mongering, and kidnappings, Esther has remained steadfast in her commitment to humanitarian and peacebuilding work because in her words:

“This is a passion; you don’t do it for money. You do it because you are interested in saving lives, causing change, and leading social healing so that the wounds, pain, and suffering of your people are relieved.” 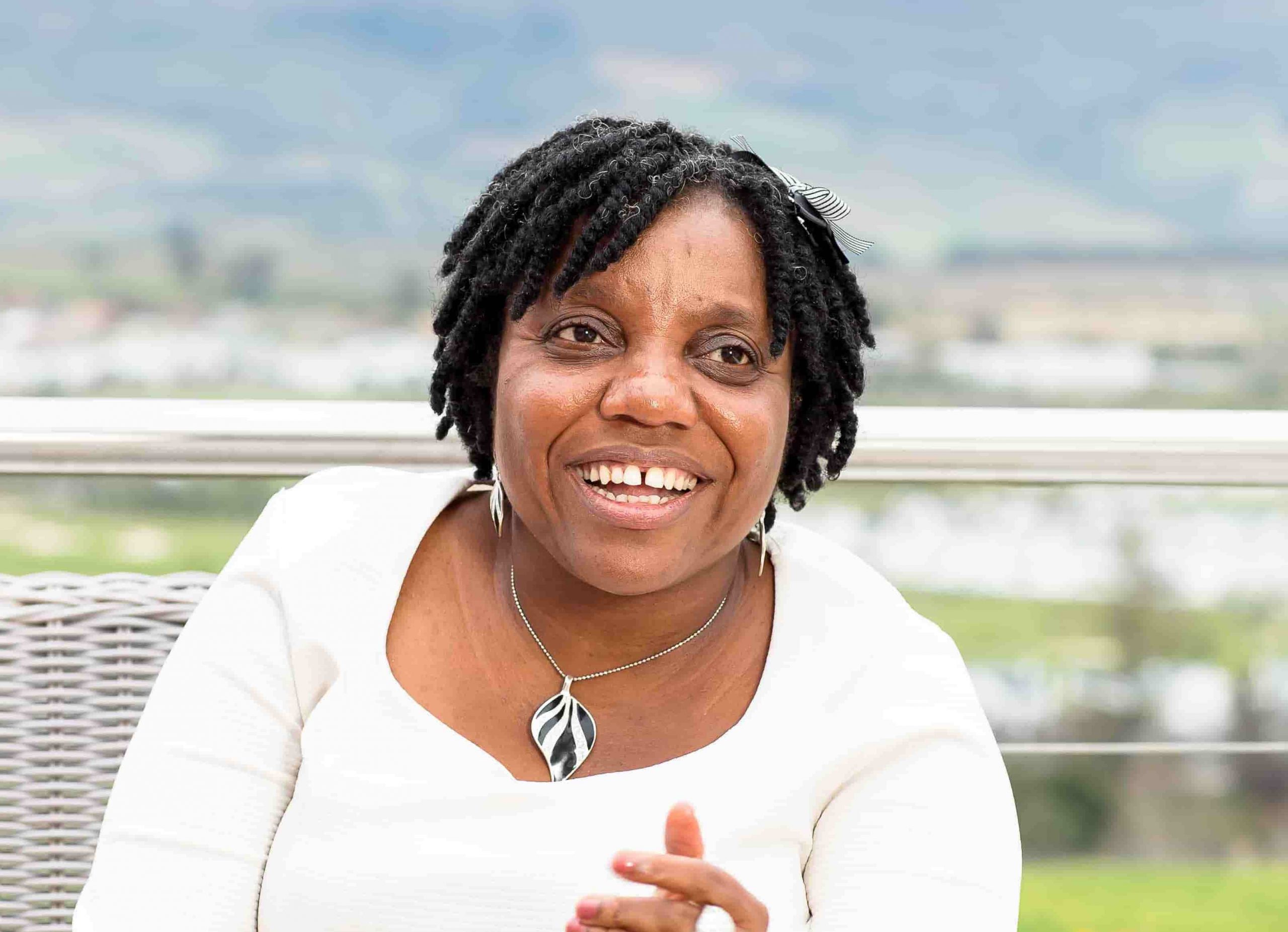 Overview of the Anglophone Conflict: Divided by Language 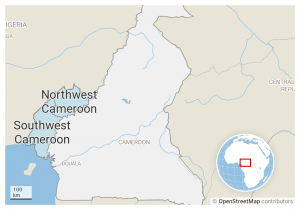 Longstanding socio-economic grievances and political marginalization of Cameroon’s Anglophone population by the Francophone-dominated government sparked protests in October 2016. The escalation of violence has brought the country to the brink of civil war with devastating social and humanitarian consequences.

2016 (October) – Protests and strikes began over the imposition of the French language in Anglophone courts and schools.

2016-17 – Popular uprising demanded an end to the socio-economic and political marginalization of the Anglophone regions and people. Government armed forces responded with violence and a military clampdown targeting demonstrators.

2017-18 – Escalation of violence between government security agents and non-state armed groups (NSAGs) who demanded secession of the Anglophone regions from the Republic of Cameroon.

2018-Present – Continued conflict and social and humanitarian crisis: 3,000 people killed and over 600,000 displaced.

Reach Out Cameroon began operating in the development sector in 1996. However, their work became impossible when the Anglophone Crisis escalated in the South-West region in 2017, bringing violence and huge displacement amongst the population. In February 2018, when the conflict showed no signs of abating and the needs of citizens became critical, Reach Out began integrating humanitarian response into their plans. As the first organization in Cameroon to respond to the internally displaced persons (IDP) crisis they initially tended to people in and nearby Buea, where Reach Out is headquartered, but quickly realized that they needed to expand. North of Buea, a town called Kumba had become a hub of displacement which, due to the dangerous and volatile situation in the area, had been left to fend for itself, unaided by Government or NGOs. Courageously, Esther acted:

We decided to take the bull by the horns and go to Kumba, even though it was so difficult to get access. Vehicles were being burnt down, trucks were burnt, people were being killed at random. It was very difficult. 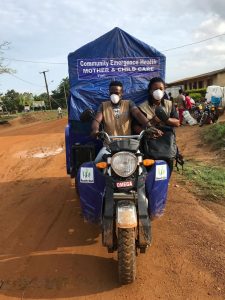 Luckily, the trust Reach Out had developed over years of work in communities enabled them safe access and they were able to provide nutritional support, basic hygiene, and dignity kits. As people grouped into IDP camps, Esther and Reach Out anticipated problems with water and sanitation and adapted their response to tend to health needs. This continues today, with Reach Out’s mobile health clinics providing a critical lifeline to some of the most remote communities in the region.

As the Anglophone Crisis continued, Esther set her sights on peacebuilding.  Reach Out had carried out peacebuilding activities during the Bakassi Conflict between Nigeria and Cameroon in the mid-2000s, but she explained that the dynamics in this conflict were incomparable: “The Anglophone crisis is very complex to address. It’s people of the same country, brothers fighting brothers.” In order to face the challenges of this internal conflict, Esther believed that disparate peacebuilding efforts needed be aligned. In May 2018, she initiated the South West and North West Women’s Task Force (SNWOT), bringing together women’s civil society organizations from across the two regions. Throughout her career, Esther has always dived in to tackle issues headfirst when many others would flee. The first activity she proposed to the coalition exemplified just that:

I told them we should contribute our meager resources and buy food and dignity kits. Then, let’s go to one of the hotspots where the guns are loud. Let us seek access and go and support the IDPs. We will send communication to the non-state armed groups and the administrative authorities and let them know that the women peacebuilders are coming.

Her bravery paid off and the group of women peacebuilders not only provided medical and psychosocial support, dignity kits, and wash items to IDPs in Muea locality, but also saved the life of a child that day. Through skilled communication, knowledge of local communities, and the ability to act independently and build trust, women peacebuilders such as Esther and the members of SNWOT were enabled access.

That day, there was a truce; that day, the guns did not make noise because we had already sent the signal that we were coming. The administration had wanted to send military in uniform, but I personally went and told them ‘We do not need you… we do not want any uniformed men near us, it will endanger our lives.’

Esther acted similarly when she realized that the Reach Out staff were becoming a serious target when delivering humanitarian aid to IDPs, often on behalf of international partners who, in fear of their own staff and vehicles “shifted all the burden onto small local organizations”. Esther decided to travel to the United States and address the leaders of the five key non-state armed groups to request a humanitarian corridor. She used her communication and critical negotiation skills to inform the leaders of the need for humanitarian response: “I had to make them know that the stance of humanitarian work is impartial. That we will operate independently.”

The Risk of Peacebuilding 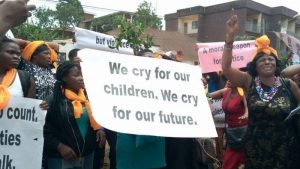 Taking on these challenges has not come without risk and great sacrifice to Esther Omam.  Over the past few years, she has received threats and attacks on her life, reputation, family, and property. As Esther’s visibility has increased, so has her need for protection (see ICAN’s Protecting Women Peacebuilders Framework for Action). In May 2019, Esther was invited to testify on the humanitarian crisis in her country at the United Nations Security Council. When she returned, stories and rumors started, and she faced a number of chilling attacks. Esther describes being attacked twice in her own home, her children and the members of the Reach Out staff being kidnapped, their humanitarian vehicle being burnt, and Esther’s own vehicle disappearing. The threats intensified after she was invited to lead a delegation of women to the United States in July 2019 to again meet with leaders of the non-state armed groups. On this occasion, Esther and two other women from SNWOT successfully negotiated the end of a three-year ban on education by non-state armed groups in the North and South West region of Cameroon. The women peacebuilders persuaded the leaders to allow schools to re-open under the condition that government-imposed uniforms would remain prohibited, a deal which Esther agreed to because “it’s not the uniform that educates a child, it’s the books.” They also convinced them to include and prioritize education in their agendas during future dialogues with the government. This huge achievement put SNWOT firmly on the map and led to their invitation to attend pre-consultations for the Major National Dialogue. However, with the increased public attention, Esther says that “plotting and framing intensified”. Having already relocated once, Esther’s says that the threats became too much, and she stepped down from her leadership of SNWOT.

The unique and challenging position of women peacebuilders means that, along with gaining trust and access from all sides of the conflict, mistrust and enemies also arise from one’s own community and afar. Following a challenging few years, Esther describes joining the WASL network as “a godsend”.  She admits that humanitarian response and peacebuilding work has not been easy but “the weekly check-in calls are enough to keep me going.” She continues carrying out humanitarian work and peace activism with Reach Out and has several exciting new projects on the horizon. Her motto: “Keep being credible and gaining the trust.”

The weekly WASL check-in calls are enough to keep me going.