By Lauren Mellows and Helena Gronberg

At 8pm every evening since February 1, 2021 hundreds of thousands across Myanmar bang pots and pans to demonstrate their non-violent resistance to the military coup. This symbolic act is part of the Red Ribbon campaign, a nationwide Civil Disobedience Movement (CDM), launched by Myanmar’s medics to disrupt the normal functions of the country.

“We strongly believe that if all the civil servants join the movement, there will be no workers at the office, no doctors at the hospitals and no teachers at schools. We all believe the Civil Disobedience Movement will work and will affect the functioning of the military council,” explains May Sabe Phyu, Director of the Gender Equality Network (GEN) and a member of the Women’s Alliance for Security Leadership (WASL). The movement’s message is clear she continues. “We are not afraid; we are resisting the coup and we will fight back until we die.” 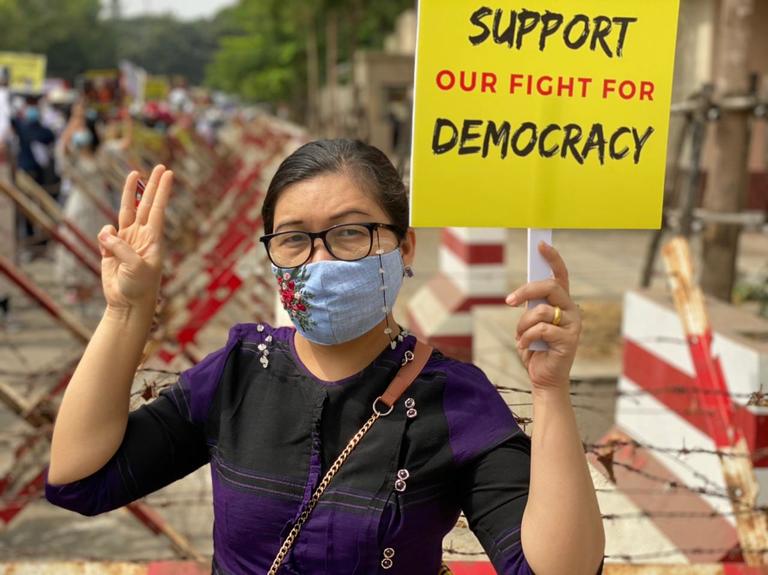 May Sabe Phyu protesting outside the Chinese Embassy 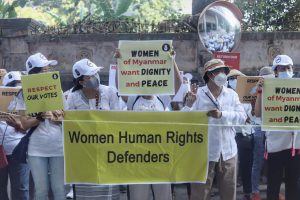 GEN is one of the largest networks working to bring about gender equality and the fulfilment of women’s rights in Myanmar, a country marred by a turbulent democracy and a history of ethnic armed conflict and military rule. Established in 2008, GEN’s diverse and inclusive network is made up of more than 100 civil society organizations, NGOs and individuals. For more than 10 years the organization has worked hand in hand with Myanmar’s government to facilitate better policy and legislation for women and girls. Additionally, as a member of the Alliance for Gender Inclusion in the Peace Process (AGIPP) GEN has consistently advocated for women’s participation in the ongoing peace process between the government and several ethnic armed organizations (EAOs). Now, with Aung San Suu Kyi and other democratically elected leaders detained, their work has abruptly halted:

“All of our work, advocacy and activities need to be stopped, we are in the middle of nowhere. What is going to happen and how we will continue our work, right now is quite unknown.”

“We are not violent, but we are showing resistance”

Despite the uncertainty and the military’s increasing intimidation tactics, May Sabe Phyu remains focused on strategizing and engaging in the peaceful protests taking place across the country. She explains:

“Since the coup we can’t sleep, people of all ages have expressed their spirits and resistance by going into the streets and joining public protests... Every day we wake up and prepare to join the protests.”

In Yangon, the CDM – since some days ago – are centering their protest around the foreign embassies, using these locations as a method of protection for the protestors. GEN together with other women’s rights networks and organizations has written an Open Letter for the ASEAN Chair, Brunei and called on the Indonesian embassy for support. The organizations and networks working for gender equality and women’s rights in Myanmar also drafted an Open Letter to the United Nations Human Rights Council and plan to march to Nordic House in Yangon, which houses the embassies of Denmark, Finland, Norway and Sweden.

“They are trying to sow fear in the people” 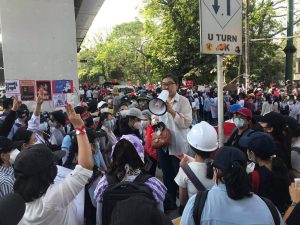 May Sabe Phyu addressing a crowd during a protest

Across the country people are facing a new restrictive cybersecurity law and internet shutdowns, particularly at night when the military ramps up raids on houses. In addition to political leaders, civil servants who have joined the movement are being arrested. However, the military’s physical response to protests has varied from city to city. In Yangon where “the world is watching”, May Sabe Phyu explains how the military is showing its presence with water cannons, tanks and trucks loaded with soldiers but there has not yet been a violent crackdown. In other cities such as Mandalay, Myitkyinar and Naypyidaw (Myanmar’s capital city), protesters have been dispersed more forcefully. For many, the country’s current climate evokes distressing memories of the brutal suppression of the 1988 uprising however, this time the resistance movement is more unified and has collective leadership, spearheaded by student activists and youth. May Sabe Phyu encapsulates the determination and commitment behind the movement in her words:

“This is the end game for the military… There is no if, we have to win this time.” 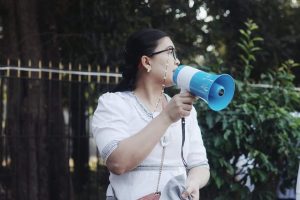 May Sabe Phyu and GEN’s requests to the international community are straightforward:

“If no one is selling weapons to them [the military], they cannot shoot us.”

Repeatedly May Sabe Phyu said, “We are not afraid”. However, what she does fear, is that if the situation is prolonged, the international community will become distracted by other conflicts and lose interest, civil servants will tire and return to work and the coup will succeed.  Already the military is trying to gain legitimacy by negotiating with some of the ethnic armed groups.  But May Sabe Phyu is adamant that “we should not recognize it; they are an illegitimate dictatorship.”

For updates on the situation follow Gender Equality Network YouTube Channel and watch their latest videos: Message for Current Situation in Myanmar, Message for ASEAN Community.