“The youth aren’t leaders of tomorrow; they are leaders of today and we challenge them to take up leadership now!”

On June 2, 2021, the Coalition for Action on 1325 (CoACT) and the Embassy of Sweden in Kampala hosted a ‘Democracy Talks’ event bringing together civil society, youth leaders, members of the police force, media, and representatives from the Swedish embassy, to discuss youth participation in democratic processes in Uganda. The event, which was held at Hotel Africana in Kampala and streamed live on NTV Uganda, was opened by Robinah Rubimbwa, Executive Director of CoACT and a member of the Women’s Alliance for Security Leadership (WASL).

Representing the Swedish Embassy, Daniel Johansson Århem emphasized the importance of engaging youth in political processes in order to enhance peace in the country. He thanked CoACT for their partnership and asserted that, through Sweden’s Drive for Democracy initiative: “We will continue to do all we can to be a strong voice and actor for democratic development around the world.”

The ‘Democracy Talks’ event was the culmination of over a year of CoACT’s efforts to mobilize youth to build sustainable peace in Uganda. Since May 2020, CoACT has implemented a program to increase inclusiveness and youth participation in election processes, funded by ICAN’s Innovative Peace Fund (IPF). Through consultative meetings with over 80 youth leaders, CoACT sought to understand the barriers which prevent youth participation in decision-making, election processes, conflict prevention and resolution. In particular, the process explored the double burden female youth face, which limits their participation in leadership roles. CoACT then developed a comprehensive training program to increase youth’s leadership and advocacy capacity, knowledge of election processes, and peacebuilding skills.

“If guided and trained properly, youth have the potential to keep peace!”

In January, CoACT initiated the world’s first Youth Elections Observatory center, a week ahead of Uganda’s highly anticipated 2021 general election. The center, supported by ICAN’s IPF, is a youth-led mechanism for preventing violence before, during and after elections. 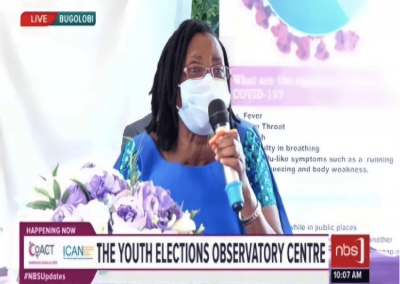 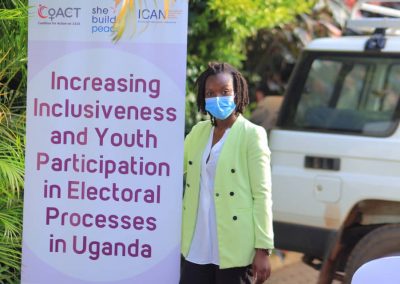 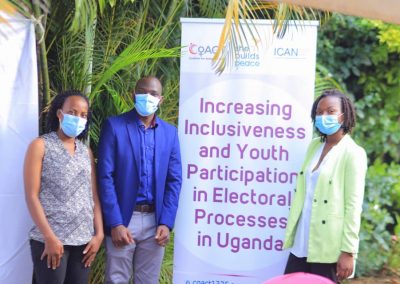 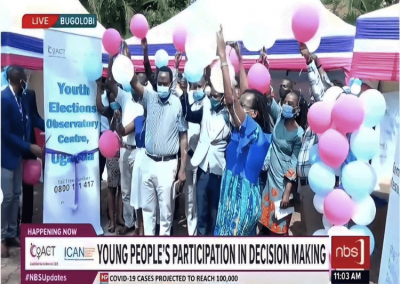 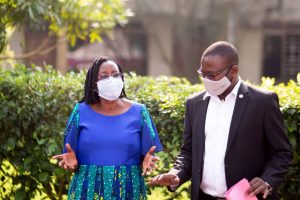 Since 2011, Uganda has experienced violence during election campaigns, on voting day, and in the weeks and months following each election. The 2016 post-election violence was the worst the country had ever experienced. As the level of violence increases, the government finds a reason to unleash police brutality onto citizens, especially targeting campaign rallies of opposition candidates.

During these periods, young people, who make up a strong majority of the population (over 75% of Uganda’s population is under 30), often find themselves enmeshed in violent contestations. Gangs of youth, particularly young men, are recruited by politicians to disrupt campaign rallies, harass or attack political candidates and cause insecurity. In post-election months, youth may be mobilized for violent protests by those who contest the result, resulting in arrests, injuries and even death.

At the same time, apathy among the youth electorate towards elections continues to grow in Uganda, as they feel disenfranchised and powerless to create change through fair and free elections. This disengagement is particularly strong among young women, whose participation is limited due to lack of knowledge of enabling laws, persistent stigmatization towards women’s leadership, and lack of confidence. CoACT seeks to bridge this gap and emphasize 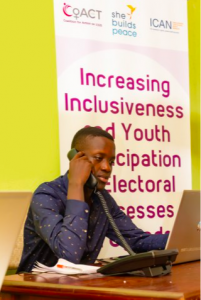 In preparation for the opening of the Youth Elections Observatory, CoACT trained male and female youth on election monitoring, observation and reporting. The youth leaders developed a strong understanding of conflict early warning indicators and 20 were accredited as election observers on completion of the training. During the 2021 general elections, the Youth Elections Observatory served as a central hub for early warning and rapid response to election-related violence across four districts: Kampala, Kasese, Ntungamo, and Kabarole. The center was managed by four youth observers, who operated a toll-free telephone line that members of the public could use to report instances of violence. The 16 other youth observers were deployed to potential hotspots of violence across the four districts to look out for incidents, such as gender-based violence, obstruction of observers and agents, inconsistencies in the voter register, malfunctioning biometric machines, and voter bribery and intimidation. They reported incidents back to the center, where members of the Ugandan Police and Electoral Commission remained to analyze and coordinate real-time responses.

“To the youth listening: you can use alternative means of resolving a conflict – you can report, you can reach out to us or the authorities, but don’t go to the streets to riot.” 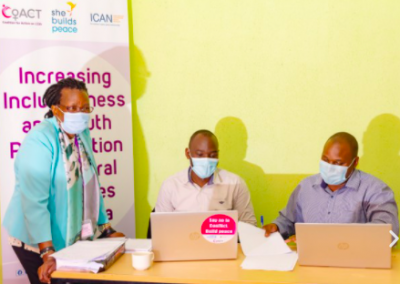 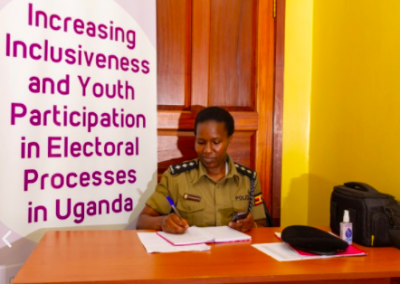 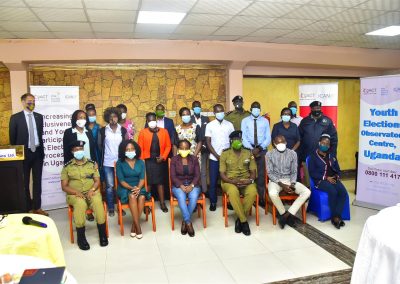 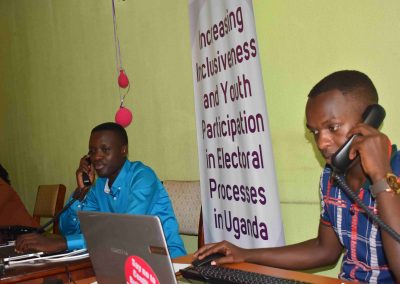 Looking to a More Peaceful Future

A total of 112 incidents were reported to the center before, during and after the elections by the youth observers and members of the public. One incident, reported by a youth observer, was the theft of polling kits from Kacerere polling station in Ntungamo district. As a result of quick reporting, the Electoral Commission immediately responded by pausing the vote there and postponing it to the next day.

The role of the center as an early warning and reporting mechanism and the presence of youth observers significantly improved election-related security in the districts where they were operating. This impact was particularly obvious in Ntungamo and Kasese districts, where the 2021 election period passed peacefully as compared to the 2016 general elections, which witnessed high rates of violence.

“If it was not for this observatory center, Kasese and Ntungamo would be on fire by now. The Youth Elections Observatory center is really an effective mechanism in preventing election-related violence. Actually, the center should be maintained for early reporting and response to all forms of peace-related issues.”

As a result of the tremendous success of this project and the center, CoACT’s next IPF project seeks to create more learning opportunities and dialogues for young people to discuss strategies to increase their participation in decision-making, conflict prevention and resolution. CoACT will also expand geographically, mobilizing youth leaders in two more districts, specifically refugee-hosting districts.

“We are looking to see what lessons we learn from this first experience so we can refine the concept for the future. I believe many countries will adopt the use of the Youth Elections Observatory as an effective mechanism for preventing and mitigating election-related violence and as a best practice for increasing youth participation and leadership in electoral processes in the future.”

Established in 2014, the Coalition for Action on 1325 (CoACT) is an alliance of organizations that work to inspire women’s leadership, amplify their voices and coordinate civil society action in building and sustaining peace in Uganda. CoACT works to promote inclusive governance, social accountability, women and youth’s participation in decision-making, conflict prevention and conflict resolution.