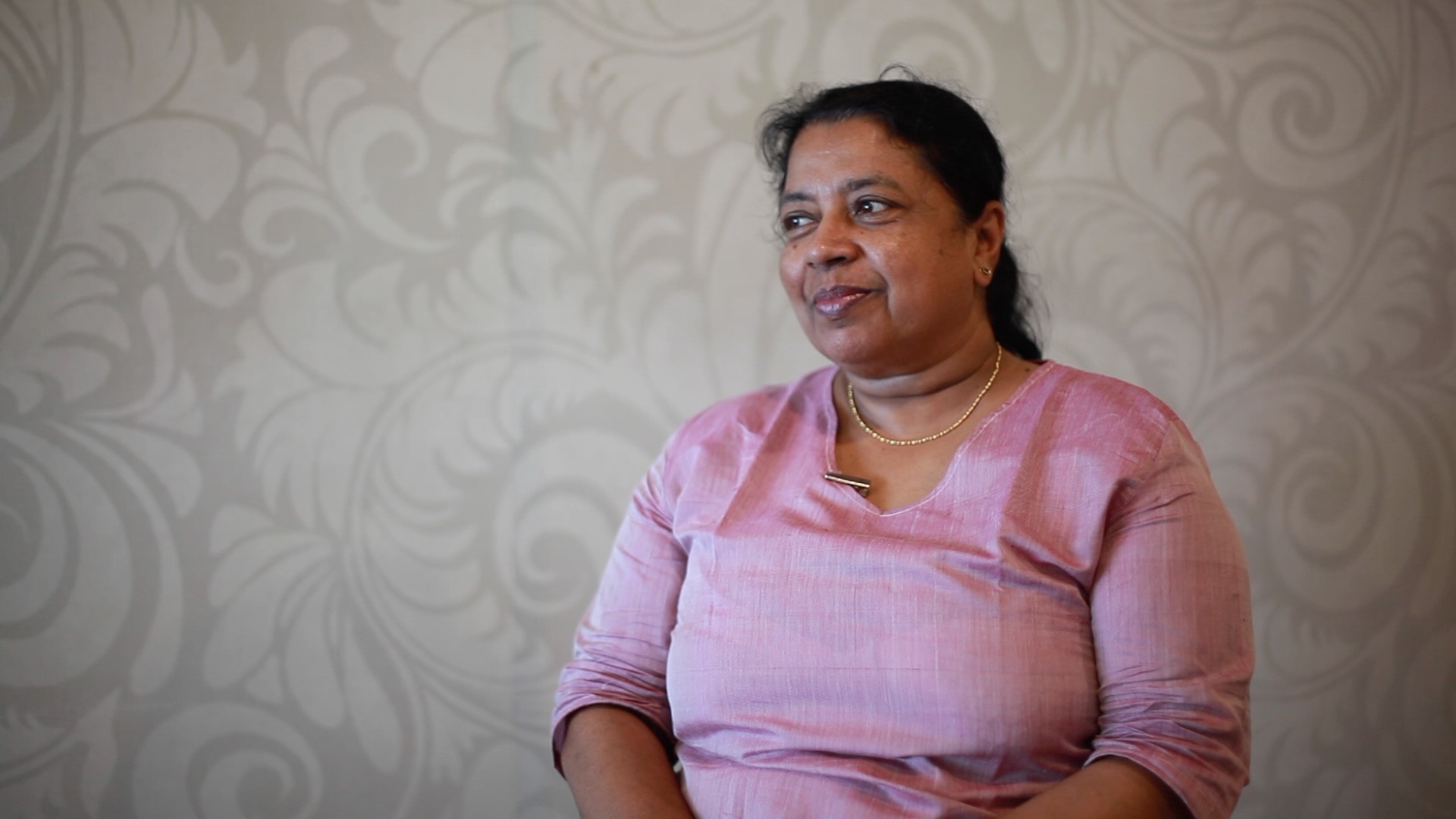 For more than a quarter of a century, Sri Lankans were at war with each other. Visaka Dharmadasa’s two elder sons were drafted into the army. One went missing in 1998.

Dharmadasa was devastated by the news and enraged by the lack of information that the government would release to her and other families. In her grief, she decided to take a stance – leading a delegation of other mothers of missing servicemen into the jungles to meet with the guerillas who were responsible for their sons’ fate. Dharmadasa’s outreach to the Liberation Tigers of Tamil Eelam (LTTE) opened a back channel for negotiations on a ceasefire in 2000. She also became founder and chair of the Association of War Affected Women (AWAW).

Visaka Dharmadasa talked to us about her experience walking into the lion’s den—literally.

How did you get involved in peace activism?

The war in Sri Lanka lasted 26 years. It was a brutal war among a group of young Tamil people, and the governmental forces. It was based on discrimination, and fought for dignity. I live in Kandy. My two sons joined the military, and this is when I knew I had to do something. We started the Kandy Association for War Affected Families, and went into social clubs talking to men and women about how we have to do something to stop the war ripping our country apart. The day my second son went missing was the day I said the war was at my doorstep. I never looked back, knowing what war is all about.

What was your experience like coming face to face with fighters?

With great difficulty, we got the permission to go to the Tiger territories. The church helped us. We were seven women. It was very special. Even I remember seeing these youngsters in civilian clothes carrying T-56 automatic rifles on their shoulders, circling our vehicle. For some reason we did not feel threatened. But when the local leader came to meet us, he wanted to keep a distance between us and them. We all sat on the ground, and we asked him if he had children and he said yes. We offered him sweets, which were a luxury because of an economic embargo, and we were able to connect. We had a good relationship until he died in 2009. He opened the doors for me to understand, not accept, but understand the path they took. They were pushed to a corner. We conducted what the conflict resolution language calls shuttle diplomacy.

Could you tell us, in detail, about your grassroots work in your country?

AWAW has been involved in peace building from its inception. We work in all three tracks and have conducted a dialogue series running parallel to the official process. We are also working on the WPS agenda for the past 17 years. We have trained more than 2000 women to run for political office, and drafted a localized manual on UNSCR 1325. Currently, AWAW is working with women on reconciliation and transitional justice.

Why is it important for women to be part of the peace process?

I have always believed that the women bring a whole new perspective to the negotiation tables and that is why we are saying that we want to be there. For a mother, the lives of their husbands, sons and daughters are much more important than borders. Men socialize in a very different way; to protect or conquer. Their mentality and what it brings to the table is completely different than what we bring to the table. And we do it with passion, and this passion can win hearts, devoid of egos.

Extremism is a state of mind of some individual, they cannot think rationally, and that has to be addressed. Religion can play a major role in addressing extremism. A multi pronged strategy, which includes education, livelihoods and sports and music for youngsters can make a change.

In life if you are extreme on anything, it is not going to work. It is going to have a negative impact. Around the world we are witnessing a rise in extremism, notably religious extremism and political ideology. All these young people are our sons, whether it is ISIS, Al Qaeda, or any of these groups.

Some people always relate Islam to extremism. Coming from a region with different religions, what is your take on the matter?

Buddhism is a moderate religion, if you are Buddhist you cannot be an extremist. But the way some of the Buddhist monks behave, such as in Myanmar and the connections they have in Sri Lanka, is terrible. They are supported by governments. The former Sri Lankan government supported this. For Mahinda Rajapaksha it was more than hating Muslims, it was money coming in. The world is never isolated. There are connections you don’t even know about and they go too deep, and the negative consequences creep into deep interiors.

Being a Buddhist, I have been very surprised of the brutality that I have seen from Buddhist countries. In the aftermath of World War II, Mr. J.R. Jayawardena, a minister of Sri Lanka, spoke at the San Francisco Peace Treaty in 1951, and asked to pardon Japan. He said: “Hatred will never be ended by hatred, it is only compassion that can end hatred,” and requested compassion towards Japan. That’s why Japan now has a good relationship with Sri Lanka. This is directly from the Buddhist script. So why can’t the monks today preach these basic principles?

When it comes to funds and investment, how do you see the balance between military solutions and peace solutions to extremism?

The answer lies somewhere which is beyond us. We do know that peace funds are pennies compared to millions spent on war. But even with that very little money, we have gone far. What we really have to make the world understand is that there are better economies than war economies, especially the arms manufacture. One whole lorry load of tea has to be sold to buy one gun and this is not right. The food for thousands is equal in price to the weapon for one, which is not to save people but to kill them. We spend so much on health and new medicines to cure people but the very same people manufacture weapons, which kills thousands. It is very difficult since the war industry is a well established industry worth billions of dollars. Still we can challenge that and can raise public awareness that war economies will never make this world better. If you can define security the way women define it, that paradigm shift is what is needed for the world. If we can make the enemy secure, the enemy will not be an enemy anymore.

If you were president of Sri Lanka, what would be your priority?

Sri Lanka needs to implement a comprehensive reconciliation process, which means it has to first get the new constitution passed with greater devolution of power. The constitutional and legal arrangements should include: right to life as a fundamental right; improved human rights laws so that they become fundamental rights; women’s rights to be enshrined with a special emphasis for affirmative action when necessary; quotas for provincial and parliament seats for women; and greater emphasis on environment protection. Transitional justice arrangements should implement the four mechanisms that the government promised and the recommendations of the Consultation Task Force (CTF).

Why is the International Civil Society Action Network important to your work?

ICAN is extremely special, more so than any organization that I know of, whether local, regional or international. It is genuine, and the world has very few genuine organizations. ICAN has only one agenda, and that is peace. Most importantly, it treads difficult waters. It always takes on the biggest challenges. I hold in high regard what co-founder Sanam Naraghi-Anderlini says: “We are always re-acting, why not be pro-acting?”

No matter the geographical boundaries, women come together to challenge the status quo of radicalization. It is very beautiful, and I believe it has a long future.