ICAN participated in a number of CSW events

Throughout the two weeks of CSW, ICAN and WASL partners participated and contributed to several panels and events highlighting the work of ICAN and WASL in promoting women’s voices.

BPI Program Manager, Helena Gronberg, participated in panel on “Transforming Gender Roles and Expectations: The Power of the Media”

The discussion “Transforming Gender Roles and Expectations: The Power of the Media” centered around a number of films made by multiple organizations about gender roles in society, and how they need to change.  The films’ countries of origins include Nepal, Egypt, Albania, Peru, Lebanon, and the US. Many addressed gender expectations, including by showing how female stereotypes perpetuate violence against women, and flipping gender roles (having men perform traditionally female work, such as cleaning).  Some of the videos shown tackle violence against women, including domestic abuse and FGM. The last two videos were aimed at increasing women’s participation in politics and peacemaking.

While introducing videos produced by UNDP, Ms. Nikila Shrestha, a reporter from Nepal, discussed how some gender roles are so deeply ingrained that we don’t realize how strict they are until we swap gender roles.  The videos aimed to change the mindset of the younger generation, but also changed the opinions of older members of society.

Ms. Maya Morsy, head of Egypt’s National Council for Women, introduced a series of videos as part of a movement against the Arabic character that is added to the name of a profession to make it feminine. The campaign had a chain impact, making men proud of their wives, daughters, and sisters.

Ms. Helena Gronberg, program manager of ICAN’s Better Peace Initiative, introduced ICAN’s animation on gendered traditional justice and spoke about its use as a tool to help spread awareness and promotion of inclusion, gender equality, and women’s rights.  As an example, she cited how ICAN’s partner and WASL member, the Association of War Affected Women in Sri Lanka, has used the animation to raise awareness and facilitate understanding among female tea plantation workers, on the reconciliation process in Sri Lanka.  She also shared that the idea of producing short animations grew out of ICAN’s Better Peace Tool booklet, an open-source guide offering practical steps for the effective inclusion of women peacebuilders and gender perspectives in mediation, conflict prevention and peacemaking. 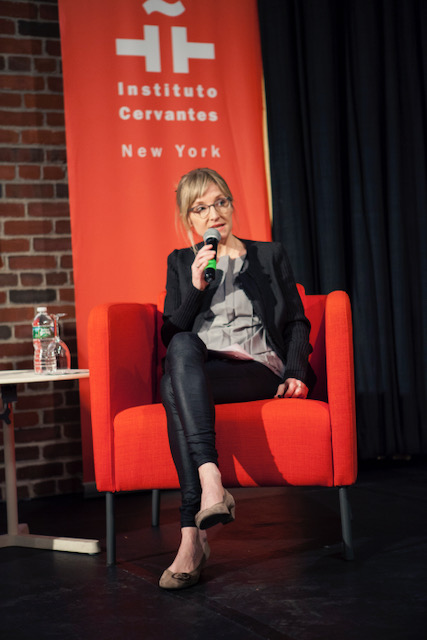 Ms. Anne Marie Goetz, the chair of the discussion and clinical professor at the Center for Global Affairs in the School of Professional Studies at NYU, asked the panelists to respond to the idea that social media is an angry place for feminists, and comment on any negative responses they have received about the videos.  Ms. Gronberg spoke about how feedback–even negative feedback–is helpful in improving the animations. Ms. Morsy spoke about the importance of continuing even if there is a negative response, saying, “Starting the dialogue, even with backlash, is breaking the silence.”

In response to whether countries should stop a tv show or ad by law because it promotes gender stereotypes, Ms. Morsy shared that Egypt has developed a code of ethics regarding the representation of women in ads, shows, and media.  While it is not a law passed by parliament, a consumer protection council is mandated to intervene on the grounds that something that humiliates women is not freedom of expression.

Ms. Gronberg concluded the conversation, saying that the use of media, social media, and videos is the way to go in the day and age were living in.  People don’t read anymore (beyond twitter character limit)–they want pictures!

ICAN’s France Bognon, Program Manager of the Innovative Peace Fund (IPF), participated in the private CSW roundtable discussion “Transforming Global-Local Partnerships in Pursuit of Durable Peace” on March 20th.  The conversation was organized by the Joan B. Kroc Institute for Peace and Justice and hosted by Ms. Jen Freeman, their Associate Director for the PeaceMakers Programs. The foundation of the discussion was a frank and honest conversation about how to make peacebuilding more effective. Persistent barriers to women’s full and equitable participation in peace processes exist in spite of empirical evidence demonstrating that meaningful engagement of women is one of the strongest indicators of increased durability of a peace agreement.

Ms. Bognon presented on ICAN’s IPF model, a multi-donor fund providing small- to medium-sized, timely grants to support women’s leadership in countering extremism and promoting rights, peace and human security.  The IPF was created, in collaboration with its partners, in response to the myriad of obstacles in getting money to women-led organizations on the ground, including logistical, programmatic, and policy-level. Logistical challenges include confusing or difficult application procedures, language demands for reporting, and/or that the requested funds are too small to attract major donor funding or too large for small grant organizations (e.g., UAF, Mamacash).  Programmatically, many requests for proposals (RfPs) require that organizations “projectize” their work and tailor it to suit the call of the RfPs, rather than pursuing their own ideas.  This approach is neither sufficiently responsive nor flexible to meet the realities on the ground. Challenges with policymaking center around ensuring women’s participation in policymaking efforts, including advocacy, active participation, and decision-making.

Organizations participating in the IPF receive technical and financial support, as well as strategic guidance. This helps build sustainable organizations, which then increases their ability to receive funding directly from donors. Furthermore, rather than having an open process for applications, or call for proposals, ICAN has a curated approach to finding partners, which involves identifying organizations doing valuable work and soliciting a proposal directly from them.

As Ms. Bognon explained, the IPF is unique because the focus is on investing in trust: trusting the partners’ judgment regarding priorities needed on the ground and encouraging them to inform the process. By allowing them to define the initiative and drive the program, the fund works to increase impact in their communities, which increases their credibility, both on-the-ground and globally.  Through this work, and connections with the broader ICAN/WASL network, these organizations have greater access to and influence in shaping international policies that affect their countries. Ms. Bognon concluded her presentation by explaining that “the goal of the IPF is to erase the misconception that women’s organizations can’t do it: because it’s not only that they can, but they already are.”

ICAN’s Program Manager for the Women’s Alliance for Security Leadership (WASL), Melinda Holmes, showcased our network at a CSW parallel event titled “Stronger Together: Women waging peace” on March 21st. The event was organized by the Kroc Institute for Peace and Justice. Jen Bradshaw from the Kroc IPJ moderated the discussion between the attendees and Mary Okumo, representing UN Women Sierra Leone; Sabrina Mowlah-Baksh a founding member of Women’s Institute for Alternative Development from Trinidad Tobago; and Jacqueline O’Neill, president of Inclusive Security. The conversation drew upon the role, benefits and challenges of global peacebuilding networks, as well as future approaches to making them more accessible and inclusive. Ms. Holmes emphasized the extreme value of WASL – serving as a platform where help is given and received, information and warning is presented well ahead of headlines through the direct perspectives of our partners and most importantly, where everyone is taking action.