Lucy Talgieh: “U.S. embassy moved to Jerusalem on a bridge of Palestinian bodies.”

On May 14th, nearly 60 Palestinians were killed and over 2770 wounded when Israeli forces opened fire on protesters at its border with Gaza. The deaths included 6 children, 12 journalists and 17 paramedics. The day marked the 70th anniversary of the establishment of the state of Israel in 1948 after the end of the British Mandate for Palestine.

In the protest, widely labeled as the “Great March of Return”, the unarmed demonstrators were marching  towards the villages from which they were forcibly displaced.

“They were killed in cold blood, although they posed no threat,” said WASL member, Lucy Talgieh, Bethlehem municipal representative and leading figure in the Wi’am Palestinian Conflict Resolution and Transformation Centre. This is the highest death toll since the 2014 Israel 50-day war against Gaza, when more than 1,500 people were killed.

“This disproportionate and illegal use of lethal force against unarmed civilian protesters is criminal,” said the Palestinian Ministry of Foreign Affairs and Expatriates in a Monday statement, condemning the unchecked crimes that Israel is carrying out “with impunity” due to the encouragement of some countries, including the U.S. Administration.

On the same day, the U.S. embassy was moved to Jerusalem in accordance to a controversial pledge by President Donald Trump, who recognized the city as the Israeli capital. 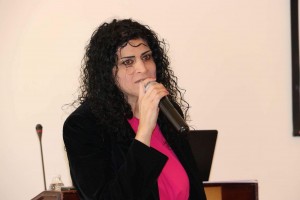 “The transfer is in violation of international law. The offender is the superpower that supposedly calls for respect for this law,” commented Talgieh. “They move the embassy to Jerusalem on a bridge of Palestinian bodies,” she said. The act is considered an attack against the historical, legal, natural and national rights of the Palestinian people. It undermines the status of the United Nations and the rule of international law and thus constitutes a threat to international peace and security, Talgieh stated.

Talgieh called for lifting the siege on Gaza, where two million people live in an area of ​​no more than 380 km2. She also called for the liberation of the West Bank, with guaranteed freedom and full equality restored to all its people.

“The situation we are living is not one for celebration and the opening of a new embassy. We live in inhumane conditions that must be changed,” she asserted.

In a special session of the U.N. Human Rights Council that was convened on Friday, U.N. Human Rights Chief Zeid Ra’ad al-Hussein said “they [Palestinians] are, in essence, caged in a toxic slum from birth to death; deprived of dignity; dehumanised by the Israeli authorities to such a point it appears officials do not even consider that these men and women have a right, as well as every reason, to protest.”

This year marks the seventieth of the Nakba, the Palestinian exodus, which “began to distort the Holy Land, making it a land of war and death” as Talgieh put it. More than 700,000 Palestinian Arabs were forced to leave their homes.

“It is a memory of death, and it is not even a reason for Israel’s celebration, as it continues to live in fear, refuses to implement UN resolutions, apprehends the demand for peace and peaceful marches by unarmed people, and continues to order its soldiers to kill unarmed people for demanding their freedom,” Talgieh said.

“This is the seventieth year of this bitter truth: that the Holy Land has become a land where man kills his human brother,” she added.

The peace activist also called upon the international community to take note of the resolutions it has adopted and to implement them. The U.N. Human Rights Council voted, on Friday, on a resolution to send a commission of inquiry to investigate. The resolution was backed by 29 members of the 47-state U.N. forum but was rejected by the United States and Australia. Another 14 countries, including Britain, Germany and Japan, abstained.

“We call on them to join us in our resistance to the evil of occupation and pressure on Israel. We ask the international community to do its duty. We call upon it to exert pressure on Israel by all effective means and by imposing sanctions to intervene for peace and justice, and to lift the injustice of the people of Gaza and the entire Palestinian people. We call on it to treat Israel as an apartheid state until it submits to international legitimacy”.

“We call on our people to stand firm in the face of this conspiracy. Jerusalem is Palestinian Arab with the presence of the embassy or not,” Talgieh stated.